The King Takes the Cross 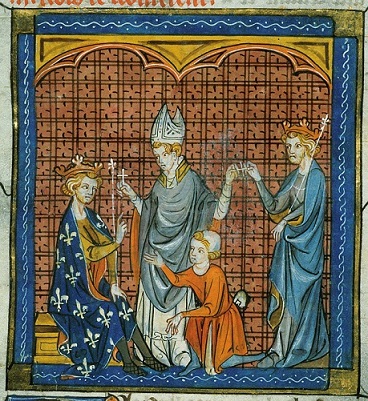 As noted in the diary for the week beginning 1 March, the King's taking of the cross, at London, on Ash Wednesday, 4 March, was widely noticed by the chroniclers. Three of these notices are translated below, chosen either because they are the most detailed (Crowland and Canterbury), or because they were subsequently the most influential (and misleading: Roger of Wendover/Matthew Paris, where the event itself is misdated by a whole month). As elsewhere in his chronicle, there are vague indications here that Wendover was reworking materials first set out in the Crowland (alias Barnwell) chronicle. Amongst modern commentators, most are agreed that the King's crusading vows were politically motivated. As Christopher Tyerman puts it, quoting Christopher Cheney, John's vow was 'a master stroke of diplomacy':

'The King's motives were almost entirely secular. As a crucesignatus he could hope to enjoy active papal support against barons who now stood in danger of excommunication if they persisted in hindering John's alleged crusading purpose. His vow also won him access to the temporal as well as spiritual privileges of a crucesignatus; these could prove extremely useful to a king at bay ... (T)he king probably intended to hide behind his cross, to claim the customary crusader's delay in answering the baronial charges, to which he had promised an answer by Easter'1

Simon Lloyd does not dissent from this opinion, although willing to allow that the King, in the aftermath, made genuine efforts to prepare a ship for his sailing to the East.2

Even the Pope seems to have shared in this scepticism, at least to judge from the opening of the letters, apparently sent in April 1215, by which Innocent III acknowledged John's vows. The scriptural passage chosen as introit here ('He who desireth not the death of a sinner but rather that he may turn from his wickedness and live') is taken from the form of general absolution addressed by a priest to the confessions of the penitent: appropriate enough to dealings with a King who had previously attracted the Pope's most withering criticism. The letter proceeds to praise the King, for his granting of liberty (libertas) and peace to the English Church, for his liberal and free (liberaliter et libenter) subjection of England to the apostolic see, and for his taking of the Cross: 'so that with a strong hand you may go to free (liberare) the land which He has purchased with his own blood'. The deliberate congeries here, of libertas, liberaliter and liberare, tell us something significant of contemporary interpretations of 'liberty'. The King, meanwhile, was promised not only papal assistance but glory and honour, since

'Although there is an almost countless host of crusaders manfully girding themselves to succour the Holy Land, all will look to you as a leader pre-eminent. And so the praise of your name will be spread more widely, and He in whose hands are kings and kingdoms in reward for your devotion will on earth secure and confirm the throne of your kingdom to you and your heirs, and in heaven the righteous judge will give you a crown of glory that fadeth not away (1 Peter 5:4)'3

Of even greater significance in political terms, the Pope's letters of 7 July 1215 demanding excommunication of the principal rebels specifically cited their impiety in rebelling against a crusader King 'who would succour the Holy Land'. This, Innocent proclaimed, made the rebels 'worse than Saracens' (peiores proculdubio Saracenis). 'Even if the King were slack', the Pope proclaimed, 'or lukewarm about the crusade, we would not leave such wickedness unrebuked, for by God's grace we know how to punish, and we are able to punish such shameless presumption'. As a result, the Pope pronounced excommunication against those who threatened 'the subversion of the whole business of the crucified one', justifying this support for the King in rhetorical terms very much as defence of the Crusade.4 These letters were themselves the Pope's response to a long petition addressed to him on 29 May, in which the King had reported on the disobedience of his baronial opponents and had repeatedly stressed his own privileges and status as a crusader.5

At Runnymede, in June 1215, the King's crusading vows were specifically cited in clauses 52, 53 and 57 of Magna Carta. Promising the restoration of unjust disseisins and the reform of forest law, the King nonetheless pleaded his right to delay pending 'the common term of crusaders', until such time as he should return from crusade, or postpone (remanserimus) his pilgrimage. Crusader rhetoric continued to surface thereafter in letters both of Innocent III and his successor, Honorius III. The King's recruitment of mercenaries, for example, in Flanders and in Gascony, was supported by papal letters offering remission of sins to those who joined the King's party, in effect as warriors in a holy cause, fighting against rebels themselves. As Innocent III repeated in letters of January 1216, the rebels against the King were 'worse than Saracens ... renegades working to fulfil the pagans' hopes by hindering such a magnificent crusade' (peiores in hac parte Sarracenis .... dum implere contendunt desiderium paganorum impediendo tam grande subsidium terre sancte).6 Meanwhile, it was the threat to the crusade, and in particular news that the city of Acre had been besieged by the Saracens, that is said to have prompted Innocent III, in January 1216, to appoint a papal legate to England. 7 This man, cardinal Guala Bicchieri, was in due course to prove a leading party both to the preaching of the royalist cause as a crusade and to the reissues of Magna Carta in November 1216 and again in November 1217.

The King was signed with the cross at London, on Ash Wednesday (4 March 1215) by William bishop of London, and with him, or after him, many of his associates, very much at his prompting, donning white crosses, like the King's, or like that of his brother or father. It was the ancient custom that the English be signed with white crosses, just as the French were signed with red. Others interpreted this in a sinister fashion, saying that the King did this not from piety or love of Christ, but so that he might deflect them from their intention. Hearing that the King had summoned foreigners to his assistance, they convened at ...., not waiting for the term originally set. And when the King, acting through envoys, replied to them harshly, they agreed that they could now no longer deal with him politely. Returning speedily to their homes, they began to munition their castles, to seek aid and to prepare horses and arms.

On the day of the Purification of the Blessed (Virgin) Mary (2 February 1215), he took the cross of the Lord, more out of fear than out of devotion <and this was taken for a doubtful thing by the better part, that he would be rendered stronger by the protection of the cross>

Dating the Outbreak of Civil War (Features of the Month)

Papal Letters of 19 March (Features of the Month)