The Conference at the New Temple, January 1215

The three documents that follow are intended to throw light upon the events of the council held in the New Temple at London after 6 January 1215, the first occasion for which we have firm proof that the discontented barons sought to lay their grievances before the King. These texts have not previously been translated and are intended to supply assistance for those to whom the Latin is unreadable. The translations also allow me to correct a fairly significant error of transcription in the printed edition of the Patent Roll, and the opportunity to note a series of previously unnoticed scriptural citations in the chronicle of 'Walter of Coventry' (now better identified as a Crowland Abbey source). For commentary, and for the significance of the three documents presented here, see the detailed account of events set out in the diary entry for 11-17 January 1215.

1. The King's instructions to Roger Bigod earl of Norfolk and William Marshal (earl of Pembroke) to prepare letters of safe conduct for those who have approached the King with their grievances. New Temple, 14 January 1215

Printed (from B) RLP, 126b, with an uncustomary error of transcription, by which Bigod and the Marshal are asked to make litteras nostras patentes, not (as in the manuscript) litteras vestras patentes.

The King to Roger Bigod earl of Norfolk etc. You should know that at our command the lord (Stephen) archbishop of Canterbury, the lords W(illiam) bishop of London, P(eter) bishop of Winchester, (Eustace) bishop of Ely, (Giles) bishop of Hereford, (Jocelin) bishop of Bath, and (Hugh) bishop of Lincoln, the bishop-elects of Coventry and Chichester, W(illiam) earl Warenne, W(illiam) Marshal earl of Pembroke, S(aher) earl of Winchester, W(illiam) earl of Arundel, Robert de Ros, Peter fitz Herbert and William de Aubigny have taken under secure and safe conduct all of those who came to London at Epiphany (6 January 1215) after the relaxation of the Interdict to appeal to us over their grievances, such protection to cover them, their belongings and men, wherever they may be in England, until the close of Easter, and in coming to court at Northampton at that term, staying there and returning home until he who lives furthest away can come properly to his homeland and his own house. And therefore we order you to make your own letters patent to this effect. <In testimony> of which <we have made these our letters>. Witnessed by myself at the New Temple in London, 14 January, in the sixteenth year of our reign (1215). And in the same way was it written to William Marshal, witnessed the same, in the same year.

2. The Account supplied by the Crowland Chronicle of events at the New Temple meeting.

Printed (in Latin only) Memoriale fratris Walteri de Coventria, ed. W. Stubbs (2 vols., Rolls ser., 1872-3), ii, 218, with words in brackets below <> supplied, thanks to Cristian Ispir, who is preparing a critical edition of the text.  The words 'respondendi' and 'quodque' are supplied from London, College of Arms ms. Arundel 10, considered by Ispir the earliest and most reliable.

Around Epiphany (6 January), Richard (dean) of Salisbury was consecrated at Reading as bishop of Chichester1, and William archdeacon of Huntingdon as bishop of Chester2, by Stephen archbishop of Canterbury. There had gathered at London various of the magnates who had demanded the charter (of Henry I). Joining to themselves, so it was said, not a few of the bishops, they came to the King on this business. However, when the King sought delays in responding, citing the novelty of the thing, he was not heard with sympathy, various people alleging that the King had quite another intention in mind, as in time was duly proved. After interventions from various parties, a final term was fixed for the King’s response, namely the octave of Easter (26 April), with the King granting safe conducts by letters patent to assure the magnates that should he not meet their conditions on the day appointed, they would each have respite in returning to their homes. And from this for the first time there emerged (vulgata est) public discussion of the charter (of Henry I), whose supporters were now united in one spirit, so that the voice and sentence of them all was as one3, so that they raised a wall as if for the house of God4, standing together for the liberty of the Church and the realm. The King for his part, however, insisted on something that had many times before been done, namely that fealty be sworn throughout England and that they stand with the King against all men, but with this further uncustomary clause added, ‘to stand against the aforesaid charter’. Since this was not heard with approval, and since excuses soon began to be offered, the King, judging this a bad time to stir up tumult amongst the people, omitted the clause that had been demanded. He nonetheless sent to the Pope complaining that the magnates were prepared to rebel against him, in contradiction of the fealty they had sworn. For he knew, thanks to various of their accomplices, that this had been planned by many of them for a long time. The magnates, for their part, complained to the Pope against unjust demands and tyranny.

A = TNA SC 1/1 no.13, original letters close, eight sets of double slits along the left hand side for the insertion of a tag, three vertical folds visible. Mutilated and heavily stained. Letters in brackets <> below supplied by Chaplais. 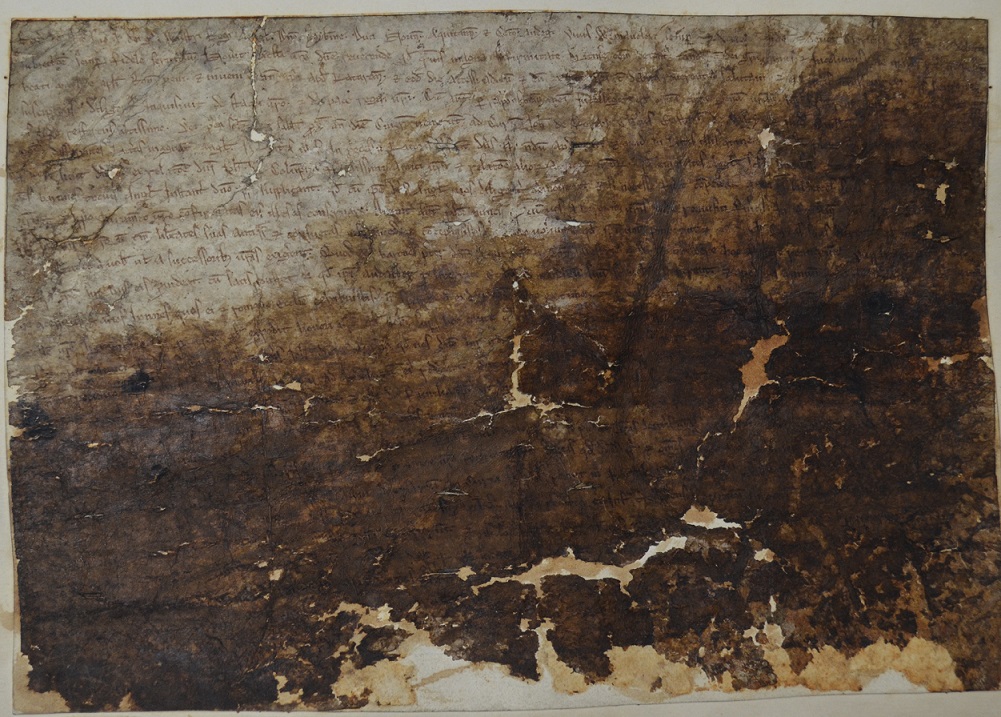 'To his reverend lord John by God's grace illustrious king of England, lord or Ireland, duke of Normandy and Aquitaine and count of Anjou, Walter Mauclerk, the King's clerk always and in all places, send greetings with due humility always faithfully to serve. Your excellency and reverend lordship should know that, although I was detained by serious illness on my journey, at last, with God's grace, I came to Rome, safe and well, on the Tuesday before the feast of St Matthias the apostle (17 February 1215).5 I found the lord Pope at the Lateran and that same day went to him, saluting him with due reverence on your behalf and presenting your letters to him. Receiving these with beneficence, he asked diligently about you and the peace of your realm. As soon as he understood, thanks to my answer, that all went well with you, he rejoiced, giving thanks to the Almighty. But afterwards, on the Saturday before Ash Wednesday (8 March), there came to the curia John of Ferriby, clerk to Eustace de Vescy, together with a certain chaplain of Richard de Percy's, named Osbert,6 carrying with them letters from the magnates of England. At the time of the sending of (my) present messenger, the Pope has still not heard the contents of these letters, nor am I entirely sure what they contain. But I know this much for certain, thanks to information from the lord Giovanni Colonna,7 your most faithful friend, and from others of your friends, that the magnates of England, namely 'the northerners' (boreales), and according to the aforementioned agents nearly all of the barons of the whole of England, have now petitioned the Pope so that, as England's overlord, he admonish, and if necessary compel you to preserve undiminished the ancient liberties confirmed to them by charters granted by your ancestors and by your own oath. The aforesaid agents say that, when you were asked to do this by your barons, at Epiphany (6 January), at London, in breach of your proper oath, you showed contempt towards conceding their ancient and customary liberties, suggesting instead that the barons make promises, and grant you charters, that they would never seek such liberties from yourself or your successors, a demand that all of the barons, save only the lord (bishop) of Winchester, and the earl of Chester and William Brewer, refused. These agents now petition the Pope for his assistance, not least because he knows that they bravely opposed you, at his command, with respect to the liberties of the Church, and that your grant of an annual rent to the lord Pope and the church of Rome, and other honours done by you to the Pope and the Roman church, were conceded by you not spontaneously or out of devotion, but out of fear and as a result of compulsion from the barons. It pains me, lord, that I must report such rumours to your excellency. But since I believe it best for your honour to act swiftly and surely in this affair, I dare not remain silent. Your lordship should know, moreover that the (Pope's) chamberlain and Giovanni Colonna, your friends, greatly desire you to give effective counsel to your nephew, the emperor (Otto IV). And it is said in the curia that he would be in good standing if he had money, since many of the empire's magnates have returned to his fealty. And so that ....... the lord Pope and the lord (archbishop) of Mainz ...... is detained. The aforesaid G.8 has made his peace with the emperor and is now of his household, or so it is said in the curia. Moreover, your lordship should know that ....... I have acquired much grace for your reverence, both in the sight of the Pope and in the eyes of all the cardinals, so much so that it is said in the curia that there was never anyone <at any> time, from your land, who found greater favour. And know, lord, that I report this to you not out of boastfulness but so that, if it please you render thanks to all, via your letters to the lord <chamberlain> and the lord Giovanni Colonna, your most faithful friends, for that which, from love of you, they have done on my behalf. And know that the lord Pope and all the cardinals regret that my business cannot be entirely fulfilled. And know that I lack for nothing, save that I have no opponent to contradict in the curia, and whatever he can do for me, the Pope does with beneficence. The Pope is to write to judges (delegate) that if Master William Testard has received the dean's stall and houses, and has acted as dean, a sentence of silence should be imposed upon him for three months concerning the appeal over the archdeaconry.9  And know, lord, that the lord Pope and your friends in the curia marvel that your representatives have still not arrived at the curia. And I advise you, in so far as I dare, that unless they have already set out, as soon as you receive these letters, you dispatch ........, Thomas of Erdington and brother Alan Martel and the lord Henry de Vere, because they are of .........  Master Peter Russignol and Master Walter of Wisbech, at the time of the departure of the bearer of the present letters ....... Master Maurice and Master William de Kane10 are ...... here at ..... the curia ..... Know moreover that the lord Pope and all the cardinals greatly desire  ........... of the aforesaid Master Peter Russignol (and his companion) ........ in the days after I came to the curia'.

Ten Letters on Anglo-Papal Diplomacy (Features of the Month)

John and Langton negotiate over Rochester (The Itinerary of King John)

Court held at Oxford (The Itinerary of King John)

John prepares against baronial conspiracy (The Itinerary of King John)

The renewal of the war (The Itinerary of King John)