The Meeting at Bury St Edmunds 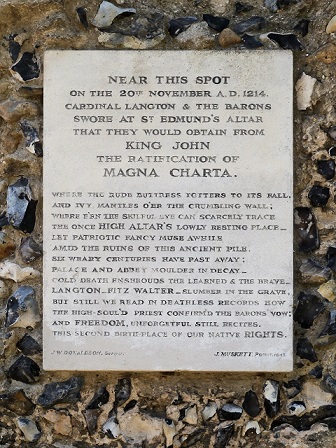 King John's diary for the week beginning 2 November 1214 sets out at length what may, or may not have happened at Bury St Edmunds in October and November 1214, around the time of the King's visit to the abbey on 4 November.  Central to our understanding of these events is an account, supplied by Roger of Wendover, of a meeting between the barons, said to have taken place at Bury.  Wendover places this meeting between his account of the King's return to England (which he misdates to 19 October 1214) and an account of the death of abbot John of St Albans and the promotion of his successor, the monk William, elected on the feast of St Edmund (Thursday 20 November), blessed as abbot by the bishop of Ely on the first Sunday in Advent, the feast of St Andrew (Sunday 30 November).  Below, I offer a full text and translation of Wendover's version of what happened at Bury, using the Latin text as edited by H.O. Coxe for his edition of 1841.   This report itself refers back to an oath by which, according to Wendover (Flores, ed. Coxe, iii, 260), King John had already sworn to restore the good laws of his ancestors, most notably those of King Edward.  This oath was sworn, according to Wendover, at the time of John's penitential reconciliation with archbishop Langton and the other bishops recently returned from exile, in Winchester Cathedral, on 20 July 1213.  Shortly afterwards, Wendover (Flores, ed. Coxe, iii, 263) reports a meeting between Langton and the barons, at St Paul's London, supposedly held on 25 August 1213.  Here Langton allegedly took the barons to one side and showed them Henry I's coronation charter which he claimed recently to have found.  Wendover supplies a text of the coronation charter (Flores, ed. Coxe, iii, 263-6) claiming that, once the charter had been read: 'They were all moved to great rejoicing, all of them swearing in the presence of the aforesaid archbishop that, when the time was convenient, they would fight for these liberties, even to the death should it prove necessary.  The archbishop promised them his most faithful support, doing all that he could.  And so, with a confederation (confederatio) made between them, the meeting came to an end'.

It must be emphasized here that Wendover was writing in the 1220s, long after the death of King John and many years after the issue of Magna Carta.  He is a well-informed source, and supplies by far the most detailed report of events offered by any chronicler.  However, he is notorious for his partisan reporting, and for his willingness to bend the historical record in favour of his own prejudices, even to the extent of deliberately falsifying historical documents.  As I explain elsewhere, in King John's Diary for the week 2-8 November 1214, there is good reason to suppose that the Bury meeting, as reported by Wendover, was either a figment of the chronicler's imagination, or occurred after rather than before the King's visit to Bury on 4 November.

About the meeting held by the barons of England against the King:  At that same time, the earls and barons of England met together in conference at Bury St Edmunds, as if for prayer, although it was for quite another cause.  And when they had begun together and in secret to debate with one another, into their midst was brought that charter of King Henry I [i.e. the coronation charter of 1100] that the same barons had received from Stephen archbishop of Canterbury, as was noted above, in the city of London.  This charter contained certain liberties and laws of the sainted King Edward, granted jointly to the Church and the magnates of the realm, saving certain liberties that the same King (Henry I) had added of his own.  So they all converged upon the church of St Edmund, king and martyr, and beginning with the greater men, swore on the high altar that should King (John) resist granting these aforesaid laws and liberties, they themselves would make war against him and repudiate their fealty, until such time as he confirmed to them by charter, sealed with his seal, all things that they sought.  Moreover, they agreed that, after Christmas, they would go together to the King to seek his confirmation of the aforesaid liberties, and that in the meantime they would prepare sufficient horses and arms so that, should the King wish to abandon his proper oath <from which they could well believe he would renege, because of his duplicity>, they would continually compel him to offer satisfaction by seizing his castles.  With these things done, each of them returned home.

Assembly at the New Temple (The Itinerary of King John)