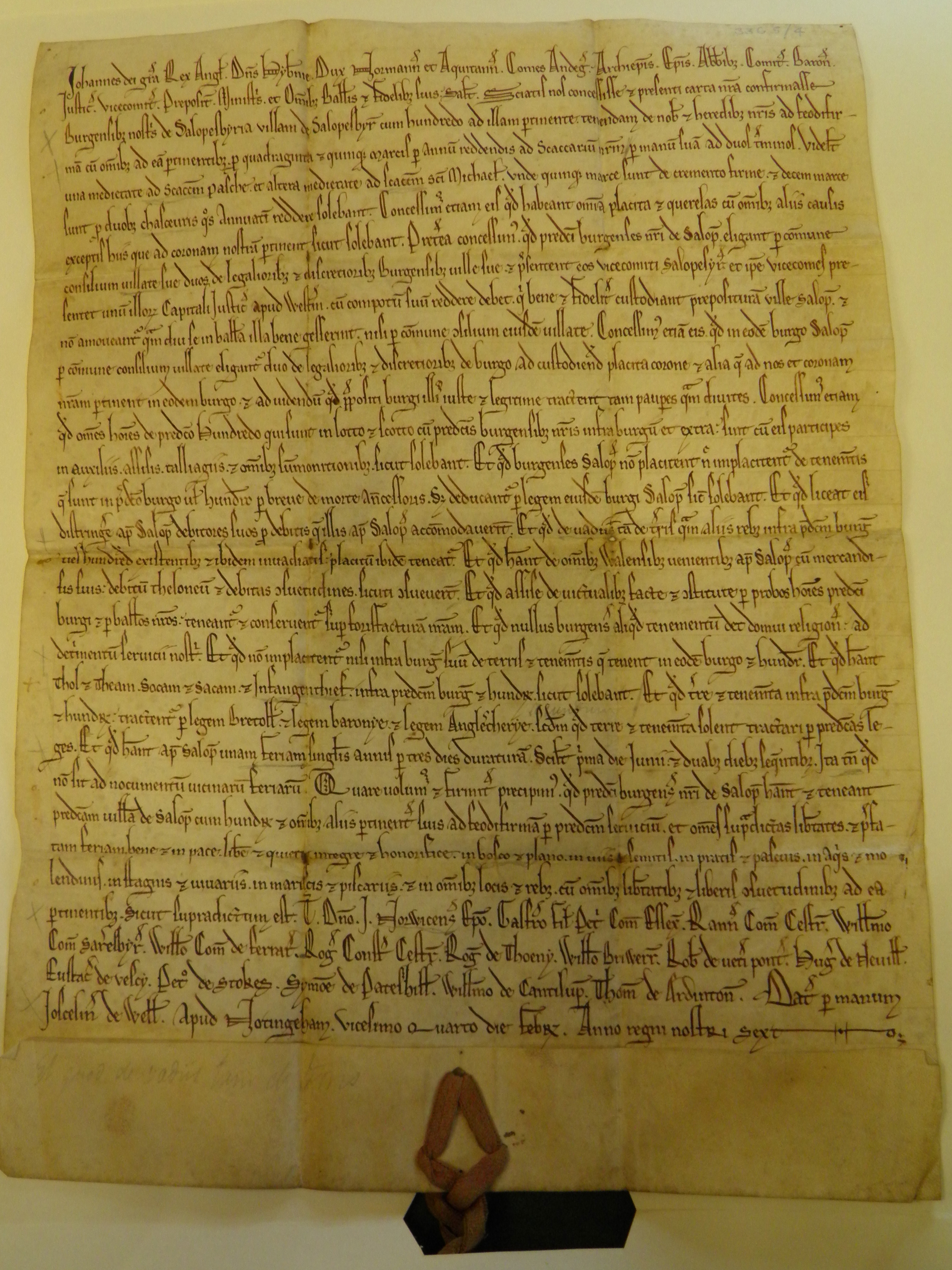 Notification that the King has granted the vill of Shrewsbury and its hundred to the burgesses of Shrewsbury at an annual fee-farm of 45 marks payable at the Exchequer at the two terms of Easter and Michaelmas, of which 5 marks are an increment and 10 marks are for the two 'chasceuri' (?beadels or pound-keepers) that the men used to supply.  The burgesses are to have all pleas save for those of the crown. By common counsel of the vill they are to elect two of their more discreet and law-worthy members, to be presented to the sheriff of Shropshire who will present one of them to the chief justiciar at Westminster whenever the sheriff's account falls due, who will have custody of the reeveship and not be removed save by common counsel of the vill.  Two of the more discreet and law-worthy men of the borough are to be elected by common counsel to keep the pleas of the crown and to ensure that the reeves of the vill deal justly with both the poor and the rich.  All men of the hundred who are in lot and scot with the burgesses are to share with them in aids, assizes, tallages and summonses, as they used to do.  The burgesses are not to be impleaded for their tenements within the borough or hundred by writ of mort d'ancestor, but by the law of the borough as they used to do.  Their debtors are to be distrained at Shrewsbury for loans made to them there, and gages made within the borough or hundred are likewise to be pleaded there.  They are to have the due toll and customs from all Welshmen coming to Shrewsbury, as they used to do.  Assizes of victuals established by the men of the borough and by the King's bailiffs are to be upheld on pain of forfeiture to the King.  None of the burgesses is to give any tenement to a house of religion by which the King's service may suffer.  They are to impleaded over their lands and tenements in the borough only within the borough, and they are to have toll and team and other liberties within the hundred and borough as they used to have.  Their lands and tenements are to be dealt with according to the law of Bretueil and the law of barony and the law of Englishry as they used to be.  They are to have an annual fair at Shrewsbury lasting three days from 1 June.