One of the aims of the Magna Carta project is to find copies of Magna Carta made in the  first century of its existence. The search is ongoing, but around a hundred have so far been located. These include copies of the 1215, 1216, 1217 and 1225 Charters, the two last usually linked with copies of the Charter of the Forest. There are a few single sheet examples, but, in the main,  the copies are found written into chronicles, cartularies,  and, most plentifully of all,  unofficial collections of legal material, sometimes called by historians ‘statute books’.   Many of the 1225 copies are found within later confirmations, especially those of Edward I in 1297 and 1300. It is hoped to present much fuller chapter and verse on these findings in due course. The purpose here  is to draw attention to a fascinating  copy of the 1225 Charters in the Cartulary of Cerne Abbey in Dorset.  Here Magna Carta and the Charter of the Forest are joined together and converted into a single Charter!  Later, however, someone at Cerne disapproved of this artifice and inserted the conclusion of Magna Carta in its proper place, only to spoil the scholarly effect by using not the end of 1225 Charter, but that of the Charter of 1217 instead. The Cerne copy has one other point of interest for it writes out  the witnesses and date of the 1225 Charter in uniquely magnificent fashion. 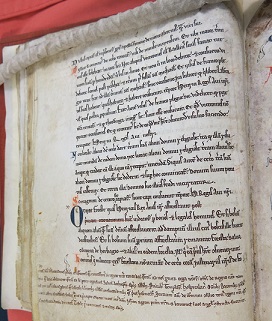 The  folios which form what is called the Cerne cartulary are  bound up in a liturgical volume known as The Book of Cerne, which is now preserved in the Cambridge University Library.1   When the cartulary was printed in the proceedings of the splendidly named  Dorset Natural History and  Antiquarian Field Club, the editor omitted the   Great Charter and Charter of the Forest (he did not say which versions they were) on the grounds that the texts  had been ‘fully printed and translated elsewhere’.2 How often do such statements prove misleading.

The copies of the Charters in the Cartulary were made in a clear and, to my eye, beautiful hand, which seems perfectly compatible with date in or soon after 1225. The same scribe goes on to transcribe other material from that year. His copy of Magna Carta itself is  accurate enough all the way down to the last chapter, which is that on scutage.  Then, however,  the scribe omitted the concluding clauses, those  which saved everyone’s pre-existing liberties, insisted that the king’s concessions be passed down,  acknowledged that the Charter had been issued in return for taxation, and prevented the king from doing anything  to invalidate his concessions. The scribe also omitted  the long witness list and the place and date of the Charter’s issue. He could do so because, having studied the documents,  he knew that all these would come again at the end of the Charter of the Forest.

Into the Charter of the Forest, accordingly the scribe now plunged. He omitted the preamble, since it was  indentical to that in Magna Carta, which he had already copied. He also omitted  the ‘in primis’ at the start of the first chapter. It was, after all, no longer  ‘in primis’. Instead, he began with the next word ‘omnes’ -  ‘all the forests’ which had been afforested by Henry II were to be deforested.  Initially, the scribe made the painted ‘O’ in ‘omnes’ exactly the same size as the ‘O’ at the start of  his chapters in Magna Carta. The only clue that a new section was beginning came in the ‘omnes’ being in capital letters. Almost at once, however, the scribe had second thoughts. He rubbed out the ‘O’ and wrote a bigger one, which indented the line below so that the text had to be written around it. That it was written  around, with no sign of erasures, shows the change was made before the scribe continued with the chapter.3 Still, although the large ‘O’ indicated a  division, it did not really alter the fact that Magna Carta and the Forest Charter had now been run together.

Why did the scribe act in this way?  Clearly he wished to avoid having to write out the same material twice, but why not simply say that the beginning and end of the Forest Charter were the same as Magna Carta?  The answer, I would suggest, is that the scribe shied away from anything which might diminish the status of the Forest Charter. The forest was a major issue in Dorset. The very next document the scribe copied out was  the forest perambulation in the county commissioned in 1225.4  Another way of shortening the work of copying the Charters, often adopted, was to leave out the witnesses.  This the Cerne scribe absolutely refused to do.  On the contrary, he wrote out the witness   list in elaborate fashion, dividing up, bishops, abbots, earls, and barons, and decorating the whole with the occasional illuminated letter. Clearly, he appreciated the significance of the witness list in placing the 1225 Charters on an altogether new footing from their predecessors.  The earlier Charters, after all, had contained no witness lists to speak of. Now in 1225, large numbers of bishops, abbots, earls, and barons, the last two both loyalists and former rebels, came together in support of the Charter. No wonder the scribe  felt moved to celebrate the date of this great event, writing it out in capitals: DATA APUD WESTMONASTERIUM UNDECIMA DIE FEBRUARII ANNO REGNI  NOSTRI NONO. He had transformed what in the engrossments and in the copies (if it appeared at all) seemed a boring list of names into something rich and full of meaning. 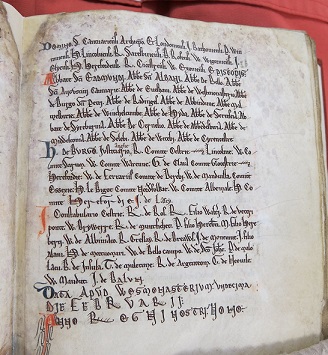 It seems  a shame that someone came along to spoil  the omnibus Charter which Cerne had created. As can be seen from the first image given above, at the bottom of the folio with the scutage chapter,  a different hand has inserted  the passages about passing down the concessions, saving everyone’s existing liberties,  and destroying  the castles built in the civil war,  which came at the end of the  Charter of 1217.  The new scribe also included 1217’s statement that the witnesses are as named before, which referred not to any one named at the start of the 1225 Charter but to those who appear at the start of the Charter of 1217. There is no reference, however, to the sealing of the Charter by the legate and the regent.

It has long been known that many copies of Henry III’s Magna Carta are in fact conflations of the Charters of 1217 and 1225. Here one can see a conflation in the actual course of creation. Had a copy of Magna Carta  been made from the Cerne cartulary, it might simply have begun as 1225 and ended as 1217, thus concealing its origins. Just when the addition was made at Cerne, we did not know, although the hand looks more early than late thirteenth century.5 That anyone bothered to edit the Charter shows, of course,  its continuing appeal.  Here,  there was a parallel at St Albans, where Matthew Paris, once he obtained an authentic copy of the 1215 Charter,  made valiant efforts to correct Roger of Wendover’s conflated version,  which included passages from 1215, 1217 and 1225.6  The result, as at Cerne, was as much to cloud as clarify the issue. Yet the confusion was the result of the very success of the Charters.  Clearly  copies of the various versions were readily available. Clearly too, Cerne and St Albans were interested in the detail, not just the general principles. Indeed, in the Cerne copy, as in many others,  hands and marginal annotations drew attention to particular chapters. This interest in the detail was one of the strands which wove the Charters into the fabric of  English life.