Another Magna Carta Find from Pennsylvania: The Arms of Roger Bigod, Earl of Norfolk (d.1221) 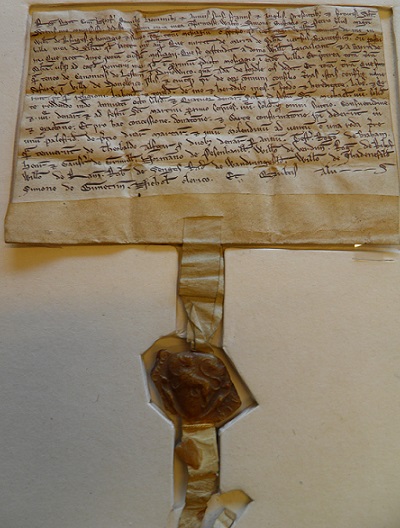 In April this year, I was able to report a remarkable find from Lancaster Pennsylvania: a sealed charter from the time of Magna Carta, supplying our earliest evidence for the arms of Henry de Bohun, earl of Hereford (d.1220).1 In accordance with the London Bus Law of historical probability ('Things always come along two or more at a time'), I can now report that a second such Pennsylvanian treasure has been unearthed.2 This supplies our earliest evidence for the seal and heraldry of another Magna Carta baron: Roger Bigod, earl of Norfolk (d.1221). In Philadelphia, in the Van Pelt-Dietrich Library of the University of Pennsylvania, there survives a charter that in the nineteenth century formed part of the collection of Sir Thomas Phillipps (fig.1). From the residue of the Phillipps library, this was offered at auction, first in 1974, and again in 1982.3 In 1995, it was sold (by the London dealer, Sam Fogg) to John Stanitz, via whom it came (in 1997) to Lawrence J. Schoenberg, a major benefactor of the University of Pennsylvania.4 Schoenberg was a discriminating collector particularly of early scientific manuscripts and of items touching upon the history of technology.5 His interest in our charter may have been sparked by its mention of a (very early) windmill.6 The windmill in question, clearly a portable object, was offered together with a small plot of land and a palfrey worth two marks, as purchase price for a grant by Roger Bigod, earl of Norfolk. In return, Earl Roger conferred upon Walter, Simon, Eustace and Peter, the four sons of Master William of Rising, the land that their father had previously held from the earl in Earl Soham (Suffolk), next to the earl's apple orchard and adjoining the barrier with which the vill of Soham was closed. Earl Roger further confirmed to Master William's sons land in Dunwich (Suffolk) that they had received from other benefactors, including the Premonstratensian canons of Leiston Abbey. It is interesting in this context to note that Master William, although himself a celibate clerk, fits into a wider pattern in which clerical marriage, even as late as the 1230s and 40s, remained a frequent though shadowy phenomenon.7 It is also interesting to find so early an example of a prohibition against land being passed on by its holders, the sons of Master William, to any religious institution: a clear sign of fear on behalf of the barons, and ultimately of the King, that their ability to raise rents or military service from such land would be impaired if it were granted away to monks or the religious. 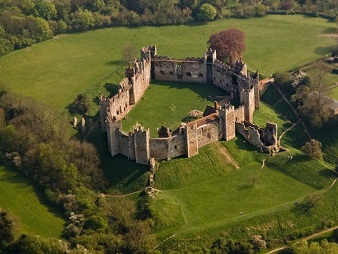 Earl Roger's charter is undated, and in theory can be assigned only to an approximate date range, after his recognition as earl in 1189, and before his death in 1221.8 In practice, however, since various of the parties, including several of the witnesses and the father of the beneficiaries, Master William of Rising, were active into the 1220s, we are able to assign it rather more confidently to the reign of King John, perhaps indeed to within a few years of 1215 and Roger's participation in the Magna Carta rebellion. Master William of Rising is probably the same man who occurs elsewhere in the household of Geoffrey de Burgh, bishop of Ely (1225-8), subsequently as precentor of St Paul's Cathedral (perhaps in succession to the rebel preacher, Master Gervase of Howbridge), and thereafter as archdeacon of London (c.1229-c.1234).9 Of the witnesses to our charter, at least four were active in the rebellion of 1215. Roger 'de Braham' (i.e. Brantham, Suffolk), Geoffrey and Henry de Gruville (alias Grimille), and William de Verdun, were amongst the many knights of earl Roger Bigod forced to make terms with the King when John obtained the surrender of Framlingham Castle, the chief Bigod fortress, in March 1216 (fig.2).10 Despite pledging their future good conduct, and in the case of Roger of Brantham, offering a hostage, at least three of these four subsequently rejoined the rebellion. Roger of Brantham, indeed, seems to have left the King's fealty as early as May 1216.11 Having succeeded to his estates c.1202, following the death of his father, Eustace of Brantham, he appears for a time as steward to earl Roger.12 Another of the witnesses, Norman of Peasenhall, seems to have been succeded by his son before October 1217.13 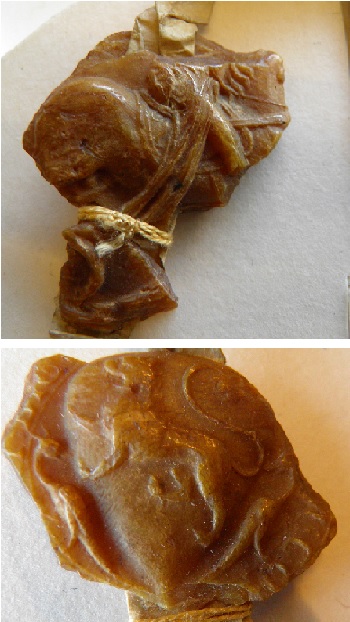 The chief glory of our charter resides in its seal. Broken at the top and bottom, this supplies our very earliest evidence of the Bigod coat of arms. On one side the seal displays a standard equestrian image (fig.3), albeit one suggesting fine workmanship and therefore manufacture by the best goldsmiths either of London or East Anglia. On the other (in this instance appearing at the front of the document as prepared for sealing) appears what seems to have been earl Roger's secret or privy seal: a lion rampant, flanked by a facing pair of winged serpents or dragons (fig.4). The seal impression is broken, with one small fragment reattached beneath the main piece of wax. This small fragment may nonetheless suggest that the equestrian side of the seal originally displayed a further animal, perhaps another dragon, beneath the horse on which the earl is shown riding.

Now this is most interesting. To begin with, it allows us to attribute a lion rampant to Roger Bigod as his principal heraldic symbol. This appears some years before the cross that occurs subsequently on Bigod seals, either on its own or in association with the device of the lion.14 As drawn to my attention by Marc Morris, a similar lion appears on the seal of Roger's son, earl Hugh Bigod (d.1225).15 Even more intriguingly, the flanking dragons on earl Roger's seal take us further into the realm of symbolism. As I have argued elsewhere, by the 1180s, both the lion and the dragon had been appropriated as identifiably 'Plantagenet' royal symbols, the lion by inheritance from Henry II's grandfather, King Henry I, the winged serpent or dragon perhaps by descent from the she-devil Mélusine, claimed by Henry II and his sons as their mythical ancestress.16 Courtier or baronial seals displaying Plantagenet lions can often be read as signs of flattery towards the ruling dynasty. Nonetheless, there are exceptions. The seal of Reginald of Cornhill, for example, the King's chief supplier of luxuries and in due course the man who surrendered Rochester Castle to the rebel barons, shows a magnificent lion but surrounded by what appear to be at least a dozen distinctly Capetian or French royal fleur-de-lys (fig.5).17 Gerald of Wales, writing c.1217, famously reports that, like pards and lions, John and his allies, were inclined to flee the scent of the flower of France.18 The counterseal of Saher de Quincy, earl of Winchester, and a member of the baronial twenty-five, shows the earl fighting with a lion, perhaps as a symbol not only of general bravery but specifically of resistance to Plantagenet tyranny (fig.6).19 Might barons shown on their seals contending with dragons or serpents also be indicating their resistance to the Plantagenet kings? Certainly, this might be inferred from the seals of Robert fitz Walter, chief baronial trouble-maker, who both before and after 1215 broadcast a magnificent image of himself decked in heraldic symbolism, riding into battle with a dragon cowering beneath the hooves of his horse (fig.7).20 If this were so, then the dragons on Roger Bigod's seal might suggest a similar determination to signal resistance by Roger (the true lion) to misrule (symbolized by now subservient dragons).

Figure 8: Pine's engraving, with arms of Henry de Bohun (above) and Roger Bigod (below)

There is satisfaction in thus identifying the Bigod arms, and rather more so in suggesting that these arms may themselves carry political as well as purely heraldic significance. By happy coincidence, Roger Bigod's arms (shown as a cross) appear immediately beneath those of Henry de Bohun (shown as a bend cotised between six lions rampant) as fifth and sixth shields in the left hand margin of John's Pine engraving of Magna Carta, published in 1733 (fig.8).21 Thanks to our new evidence from Pennsylvania, both of Pine's suppositions here are now proved incorrect. What is most remarkable is that the proofs in both instances should emerge from the far side of the Atlantic, from a part of North America not generally famed for its medieval past, and from fragile pieces of 800 year-old beeswax, weighing only a few grams, whose survival must itself be accounted little short of miraculous. To adapt the words of Pliny the Elder, 'Ex archivis semper aliquid novi'.

Notification by Roger Bigod earl of Norfolk of his grant of land at Earl Soham and Dunwich (Suffolk) to the four sons of Master William of Rising. [1189 X 1221, ?c.1210]

Philadelphia, University of Pennsylvania, Van Pelt-Dietrich Library, Kislak Center for Special Collections ms.LJS 211. No medieval endorsement. Approx. 165 X 89 + 20mm. Sealed sur double queue, parchment tag through a single slit. Fragmentary seal impression in light brown/natural wax, on the front a lion rampant on a shield, beneath it, left and right, two dragons, legend mostly defaced .....LL.......I .IG... (?SIGILLVM ROGERI BIGOD+)., reverse equestrian image, central portion only, but with some indications that there may originally have been an animal (?a dragon) beneath the horse.

Roger Bigod earl of Norfolk sends greetings to all his men and friends both French and English, present and to come. Know that I have granted, given and by my present charter confirmed to Walter, Simon, Eustace and Peter, the sons of Master William of Rising, in return for their homage and service, the whole of that messuage with purpresture (enclosed land) which the said Master William held from me in my vill of Earl Soham, lying near the waterway that runs from the pool at Soham towards Brandeston, together with the pasture lying before the gate of this messuage, extending from the house of William 'the Valiant' and from the town-bar of Soham as far as the top of my apple orchard nearest to the aforesaid messuage in the same vill, also granting the whole land that I hold from the canons of Leiston in Dunwich, that Adam of Fordley granted them, and the entire land that belonged to Sefara in the vill of Dunwich, to be held by them and by whoever they may wish, by common agreement, to grant these lands, forbidding only grants to the religious, to have and to hold of me and my heirs in feet and heredity, free and quit, rendering thence eight shillings and four pence each year, namely four shillings and four pence at Michaelmas (29 September) and afterwards four shillings at Martinmas (1 November), for all service, custom and demand. In return for this grant, gift and confirmation of charter, they have given me a palfrey worth two marks, and a windmill together with a rod (five and a half yards) of land which they held from Theobald Alfgar for a rent of two pence a year. Witnessed: Roger of Brantham, Henry and Geoffrey de Gruville, Norman of Peasenhall, William de Verdun, Roger de Ribeuf, William de Ram', Robert de Senges, Ralph of Waldringfield, William of Shadingfield, Simon of Gunton and Nicholas the clerk and many others.