By mid-August 1214, King John had heard of the defeat of his allies at Bouvines (27 July 1214). Arriving in Angoulême on Monday 17 August, the King then retraced the by now customary route northwards, via Cognac and Saint-Jean-d'Angély, to Saint-Maixent-l'École in northern Poitou.  Only in the north could he hope to negotiate properly with the French, and Anglo-French negotiations by this stage must have been at the head of his priorities, as of the priorities of the local aristocracy.  Aimery of Thouars, in a letter intercepted by John's spies, warned Ralph count of Eu, probably in the last week of August, that Philip Augustus intended to come south of the Loire in the first week of September, so that Ralph would do well to make common cause with Aimery, 'least you lose your head through your tail' (non dimittatis capud per caudam). Aimery, so his letters report, had met with John at Champdeniers, just north of Niort, on Saturday 23 August.  There he had pleaded for help in defending his lands against the Capetian army that was daily expected, requesting the arrears of all money still owing to him together with 300 knights, 300 serjeants and 60 crossbowmen, and asking that the King himself send defence to Aimery's castle of Bressuire (Bercorii)  The King instead offered only 200 knights, 200 serjeants and 20 crossbowmen to defend both Thouars and Bressuire, 80 kilometers south-east of Angers.  The vicomte replied that, were a truce to be offered by the French, he would seek terms.  The King denied him permission to enter into any such arrangement, at which point the meeting broke up.  Aimery lamented not only that John had brought him no assistance, but that he refused to believe anything Aimery told him 'either for good or for ill'. 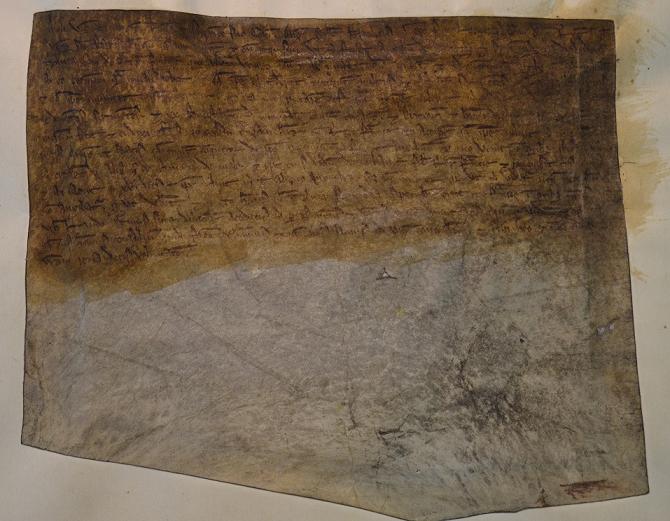 Aimery vicomte of Thouars sends greetings to his dearest kinsman the count of Eu.  Know that I spoke with the lord King of England at Champdeniers (Deux-Sèvres), on the vigil of the feast of St Bartholomew (i.e. 23 August 1214), and asked him for assistance with knights and serjeants for the defence of my land against the King of France, who should come to our parts with a great host of knights and serjeants, and I sought from him the money that he owes me and that he supply me with 300 knights and 300 serjeants and 60 crossbowmen, and that he garrison the castle of Bressuire so that I can think of defending it.  And he did not wish to supply me more than 200 knights and 200 serjeants and 20 crossbowmen to garrison the castles of Thouars and Bressuire, so that <the men> of Bressuire entirely lack .... and he did nothing for me.  And I said to him that, if I can have a truce with the King of France, I shall accept such a truce, which he did not wish to allow and so I departed from him.  And you should know that much follows from this, because he gave me nothing of the assistance for which he came to these parts, nor did he wish to believe me in anything, either for good or for bad.  And it was through his fault that the son of the King of France pillaged and burned my land and remained there for a fortnight.  But I do not marvel at this since it seems to me that neither you nor your brother are assisted as is appropriate.  And you should know for certain that the King of France will be in our parts in the first week of September, whence I urge you, without delay, to come to yours and our parts, so that you do not lose your head through your tail.  And it is important that we take counsel together what we should do and that we be of one accord.  And on this and all other matters, reply to us with your wishes.

Magna Carta and Peace (The Itinerary of King John)