John’s spies intercept a letter of Aimery of Thouars 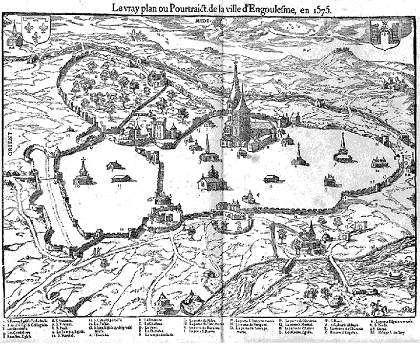 Arriving in Angoulême on Monday 17 August, the King then retraced the by now customary route northwards, via Cognac and Saint-Jean-d'Angély, to Saint-Maixent-l'École in northern Poitou.  Only in the north could he hope to negotiate properly with the French, and Anglo-French negotiations by this stage stood at the head of his priorities.  At Angoulême, on 18 August, the King ordered Peter de Maulay to make a gift of 1000 marks from his treasure at La Rochelle to Ralph de Lusignan count of Eu.1  The Lusignans themselves continued to witness John's charters into late August.2  But that they would soon wish to make their own peace with the French was not seriously in question.  Aimery of Thouars, in a letter intercepted by John's spies, warned Ralph count of Eu, probably in the last week of August, that Philip Augustus intended to come south of the Loire in the first week of September, so that Ralph would do well to make common cause with Aimery, 'least you lose your head through your tail' (non dimittatis capud per caudam). Aimery, so his letters report, had met with John at Champdeniers, just north of Niort, on Saturday 23 August.  There he had pleaded for help in defending his lands against the Capetian army that was daily expected, requesting the arrears of all money still owing to him together with 300 knights, 300 serjeants and 60 crossbowmen, and asking that the King himself send defence to Aimery's castle of Bressuire (Bercorii)  The King instead offered only 200 knights, 200 serjeants and 20 crossbowmen to defend both Thouars and Bressuire, 80 kilometres south-east of Angers.  The vicomte replied that, were a truce to be offered by the French, he would seek terms.  The King denied him permission to enter into any such arrangement, at which point the meeting broke up.  Aimery lamented not only that John had brought him no assistance, but that he refused to believe anything Aimery told him 'either for good or for ill'.3

The day before this, on 22 August, the King made arrangements to restock the castle of Merpins on the western borders of the Angoumois.4  To fend off the possibility that the Welsh would capitalize on John's problems, on 18 August letters had been sent to the Welsh princes undertaking to confirm whatever peace might be concluded with them by the justiciar, Peter des Roches.5  Although Thomas of Erdington was a key player in the King's diplomacy at this time, intimately involved in secret missions to discuss the defence of England, as a landowner in his own right Thomas was treated with the same suspicion that was extended to other English barons.  On 19 August, the King acknowledged that Thomas had delivered pledges for 2730 marks of a 3000 mark fine for custody of the lands of William fitz Alan.  Pledges had still to be found for the remaining 270 marks, and the quality of those already offered was to be submitted to scrutiny.6  On the same day, new arrangements were announced for the estate of another major Marcher baron, Roger de Mortimer.7

Established by 23 August at Saint-Maixent, the King made arrangements for the papal legate, Robert de Courson, to be received at Angoulême en route for the peace talks further north.8  He also issued routine letters patent to Hervey Belet, a Norfolk landowner, allowing him a market and annual fair at East Rudham.  These letters are notable because they survive both as a copy on the chancery Patent Roll, and as an original today in the library of Lord Townshend at Rainham Hall in Norfolk: the only original charter of King John to survive from the entire period of his 1214 expedition.9

Politically far more significant, on the same day, the archbishop of Dublin, then acting as the King's chief minister in Ireland, was sent a sheaf of instructions, to supply the King of Connaught and the other Irish kings with scarlet robes, to grant a fair and a new bridge over the Liffey to the men of the Dublin, to oversee an election to the bishopric of Cork, and to grant half a dozen of the Irish castles previously belonging to Theobald Walter to Renaud of Pons, a leading nobleman from the Saintonge.10  There was henceforward to be a close association between Ireland and Poitou, as the King began to draw Poitevin mercenaries into England, in some cases using Ireland as a half-way house.11  Given the role played by Ireland in rebellions against King John over the past ten years, there were perhaps fears that Ireland itself required protection.  Arrangements for strengthening the castle of Athlone inspired a rather petulant tone in a letter sent to the archbishop of Dublin.  'We know well enough', the King writes, 'that you are obliged to forward us every petition you receive, but you should take care against sending us requests contrary to our convenience and honour'.12