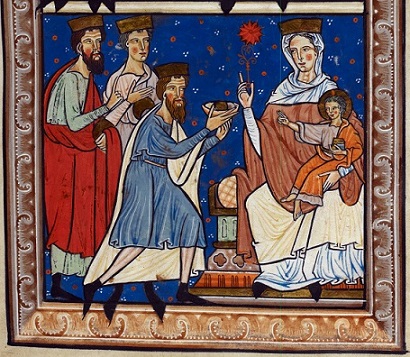 From Pontefract, the King made his way first to York (his first visit there since September 1213), and thence to Durham and Newcastle (his first progress north of the Tyne since January 1213). According to the 'Anonymous of Béthune', he was received without demure by the citizens of York, and originally intended travelling no further north than Durham. At Durham, however, outraged by reports that the King of Scots had burned the castle at Newcastle, he swore vengeance 'by the teeth of God' that he would carry his campaign north of the border. He nonetheless arrived at Newcastle too late to intercept the Scots and their young King, who withdrew at his approach.1 Both the Anonymous (in French), and Matthew Paris (in Latin) report a jest attributed to the King, that he would make King Alexander of Scotland (a red-headed youth) run like the fox's whelp for its earth.2 Meanwhile, the feast of the Epiphany (6 January) was spent, appropriately enough, at Thirsk, a manor of the rebel William de Mowbray, who would have found the King's arrival a distinctly 'cold coming'. Once again this week, a large number of northern rebels were either cowed into submission or promised safe conducts to discuss their affairs with the King. The most significant waverer here was Robert de Ros, yet another of the twenty-five, who from Durham, on 8 January, was commanded to surrender the castle and city of Carlisle, apparently held for him by his constable, Ralph de la Ferté, so that both the castle and the surrounding county might pass to the King's henchman, Robert de Vieuxpont. In this instance, we have both the King's command to Robert de Ros and his deputy, and Robert's own reply. Couched in obsequious terms, and addressing the King as 'Your Excellency' and 'Your Highness', this promised the surrender of Carlisle and the acceptance of terms for a parley at court.3 Both Robert and his son William were duly granted letters of safe conduct.4 The terms proposed with Robert threatened to leave only William de Mowbray, Eustace de Vescy, Richard de Percy and John fitz Robert amongst the original twenty-five barons as true 'Northerners' still in rebellion against the King: a highly significant reminder that the 'Northerners' were in reality far outstripped, both in numbers and in the effects of their rebellion, by the rebel barons from East Anglia. Other barons dealt with this week included Roald fitz Alan, hereditary constable of Richmond (whose castle was seized for the King and with whom terms were negotiated via the earl of Chester), Ranulf fitz Henry, lord of Ravensworth (who negotiated his peace), Gilbert fitz Reinfrey, lord of Kendal (granted safe conducts to 12 January), and the Lancashire barons Robert fitz William of Alfreton and Robert Gresley (granted conducts to 2 February and 27 January respectively).5 Ranulf fitz Henry fined 50 marks for the King's peace, payable by Easter.6 Roald fitz Alan's terms included a fine of 200 marks and agreement to clear a further 200 marks of existing debt, all payable by the following September, with a further proffer of three war horses and six sets of armour, perhaps the spoils taken at Richmond, certainly of very practical benefit to the King in his ongoing campaign.7 Others to negotiate with the King this week included the mother of William of Avranches (taken at Rochester and since imprisoned at Corfe), the wife and son of William d'Aubigny, and a number of Midlands or southern lords, including Simon of Kyme (licensed to return to his manors to negotiate both for his own peace and the ransoming of his son), Maurice de Ghent, Simon fitz Walter, Oliver d'Aincourt and Walter de Percy.8 Robert Bardulf was once again offered conducts, and in the meantime his lands were to be left undisturbed pending the King's return from the north.9 Others, including Roger de Montbegon, John d'Orreby and the men of Thirsk, who had recently made their peace with the King, were granted letters patent confirming their protected status.10 There was the by no customary spate of seizures of rebel land.11 Perhaps responding to complaints from William Brewer, his chief enforcer in Hampshire, the King extended ecclesiastical patronage to two of William's clerks, now granted livings previously controlled by rebels.12 William was also promised the lands of his son, Richard Brewer, at Chesterfield in Derbyshire, and reimbursement for £82 paid to mercenaries who had arrived from Poitou, this latter mandate involving one of the King's few surviving letters from this time, specifically addressed to the barons of the Exchequer.13 Elsewhere, the breakdown in Exchequer procedures is revealed by letters commanding William to reimburse his serjeants and crossbowmen from the local resources of Hampshire, including the profits of the New Forest which were to be paid by their keeper, William de Neville, not to the Exchequer itself but directly into Brewer's hands.14 John de Lacy's castle at Castle Donington (on the Trent, in north Leicestershire) had been taken, undefended by part of the royalist force assigned to receive Belvoir.15 On 4 January, from York, Philip Mark was commanded to release any prisoners taken at Donington, whose castle was itself now slighted.16

The barons, meanwhile, appeared powerless to resist the King's assaults. According to Roger of Wendover, they resembled nothing so much as a bunch of pregnant women, blockaded in London, thinking only of their food and drink, so that 'whilst they slept, the King slept not, but took into his possession their lands and all their belongings, their castles and fortresses from the southern sea as far as the sea of Scotland'.17 Their long wait was nonetheless about to bear fruit. At the very end of the present week, on Saturday 9 January, Saher de Quincy returned to London from diplomatic efforts in France, bringing with him no less than forty-one ships loaded with knights and serjeants.18 The 'Anonymous' speaks of 120 knights dispatched by Louis of France now landing at London Bridge.19 With the King absent in the north, southern England was about to endure its first serious foreign invasion since 1173. This in turn was to pose the most serious threat to England's ruling dynasty since the Norman Conquest of 1066.