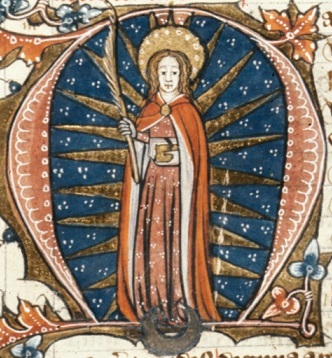 Throughout this week, the King remained at Dover, presumably awaiting a response to the summonses to military service that he had sent into Flanders and France. Dover was an appropriate place in which to celebrate the feast of the Nativity of the Virgin Mary, falling this year on a Tuesday, 8 September, in a town whose chief religious house was dedicated to Mary, 'the star of the sea'. To judge from the week's only recorded charter, in favour of the church and archbishop of Cashel in Ireland, the King was attended by the archbishop of Dublin, Hubert de Burgh and a fairly modest retinue of knights, including the Anglo-Irishmen Geoffrey Lutterell, Amfred de Dene and Richard de Burgh (Hubert's brother, a veteran in the service of John since at least the 1190s).1 The archbishop of Cashel was also granted letters of protection pending his return from Jerusalem, presumably as part of the army of the forthcoming Fifth Crusade.2 One of the King's Irishmen, Amfred de Dene, was appointed, together with Godfrey of Crowcombe, to custody of Hastings castle and the towns of Hastings, Winchelsea and Rye, with instructions for the previous keepers to hand over their 'roll' and written records.3 At the same time, the men of these three towns, leaders of the Cinque Port confederation, were promised that the King would continue to support them with money and serjeants, 'holding ourselves so close to you that, thanks to God, there will be no cause for fear and that you may know that you earned our thanks and hold yourselves and your people always in honour'.4 This reflects a wider concern for naval affairs, with orders for two of the King's galleys to be sent from Ireland into the service of William Marshal, and with a series of reprisals undertaken against the men of Flanders for arrests made on the orders of the countess of Flanders, against mariners from Rye and Hastings.5 Savaric de Mauléon, himself perhaps supervising Sandwich and other Channel approaches, was commanded to restore salt and equipment to two ships of Ipswich, unloaded at Sandwich.6 The men of Ypres were reminded of their obligation to repay money owing to the King, via the bishop of Winchester.7 In Flanders itself, as the Anonymous of Béthune makes plain, the King's agents were forced to act with circumspection in light of Franco-Flemish relations.8 Following the disappearance into captivity first of Baldwin IX count of Flanders (d.c.1205 in Bulgarian captivity) and then of Ferdinand of Portugal (captured by the French at Bouvines in 1214), the county of Flanders was administered by the countess Joan, daughter of Baldwin and wife of Ferdinand, but in circumstances made more difficult both by the French menace from the south and by the activities of her sister, Margaret d'Avesnes. From 1208 to 1212, both Joan and Margaret had lived as virtual hostages at the court of Philip Augustus.

Meanwhile, the heightened naval activity suggests concern for the Channel approaches, no doubt in fear that the barons would now seek aid from the King of France. To King Philip himself, 'his most dear lord should he so wish', there was a reiterated declaration that King John had abandoned all maltolts.9 A condition of the truce of September 1214 had been that should John abandon such taxes, then so would King Philip. What was at stake here, therefore, was John's determination to prove that it was Philip, not he, who was responsible for whatever breach of the 1214 truce might or might not occur.10 The settlement with Queen Berengaria, and the arrangements made this week for Berengaria to collect the 2000 marks now deposited at Dover Castle, formed part of this same initiative to ensure French neutrality, Berengaria having subsisted since 1204 as a pensioner of the King of France and her sister, Blanche, countess-regent of Champagne.11 Perhaps related to these arrangements, and also intended to ease Anglo-French and Anglo-papal relations, on 8 September the King commanded Reginald de Pons, his seneschal in Gascony and Poitou, to grant safe conducts for the person and military following of a man named Raymond Bernard, as soon as Reginald was assured that Raymond Bernard adhered to the Catholic Church: a reference to ongoing fears for the spread of heresy within the Plantagenet lands to the west of Agen, and almost certainly referring to the former seneschal of Gascony, Raymond Bernard de Ravignan, lord of Tonnens-Dessous in the Agenais.12 In King John's previous experience of Anglo-French warfare, a serious threat had always been posed by the claims to Gascony harboured by the kings of Castile. It may therefore be significant that amidst the negotiations at Dover, on 8 September, the King issued standard letters of safe conduct for an unidentified pilgrim, 'Erudich de Castell' (?Rodrigo of Castile), travelling with his companions to the shrine of St Thomas at Canterbury.13

Continued military activity elsewhere in England is revealed by commands for money to be sent to Walter of Clifford the younger on the Welsh Marches, to Robert de Courtenay and the garrison of Exeter, to Brian de Lisle in the north, and to Hugh de Neville 'keeping and strengthening ('custodienda et munienda') the King's castles'.14  The chancellor, Richard Marsh, was still with the King at Dover on Sunday 6 September.15 Nonetheless, the use of the King's privy seal to seal letters later this week, on Wednesday 9 September 'because we do not have the great seal with us', and on Friday 11 September 'on account of the dangers of the roads', perhaps bears out the claim of Roger of Wendover that Marsh was at this time sent into Flanders or France with the great seal, to gather support.16 Having on the previous day issued letters of protection for Stephen Langton and his castles and men, on Friday 11 September, the King granted safe conducts, to last for a fortnight from Sunday 13 September, for a series of knights and barons (William of Montacute, Robert fitz Pain and his sons Roger and Robert, Alfred of Lincoln, Gilbert de Say, Walter of Ashley and Richard Revel) 'whom Nicholas de St Brides is bringing to us and to our fealty': clear evidence that communications remained open between the royalist and the rebel camps.17