The King spent this week on the northern plain of Poitou, travelling from Saint-Maixent to Niort on Sunday 24 August, then via Brelou back to Saint-Maixent and on to Parthenay where he was to remain from Friday 29 August for nearly a week.  That he not entirely abandoned his claims north of the Loire is suggested by a charter issued on 28 August, by which he purported to confirm the rights of a man named Theobald Fressure and his wife in the city of Le Mans (Cenomann'), quit from all tallages.  The property was a small one, held in return for a rent of ten chickens.  Even so, there was a small gesture here of defiance directed against prevailing political realities.  The charter was witnessed by an impressive body of courtiers, headed by the archbishop of Bordeaux, the earl of Chester, Ralph de Lusignan count of Eu, William earl Ferrers, Hugh de Lusignan and Hugh de Gournay.1 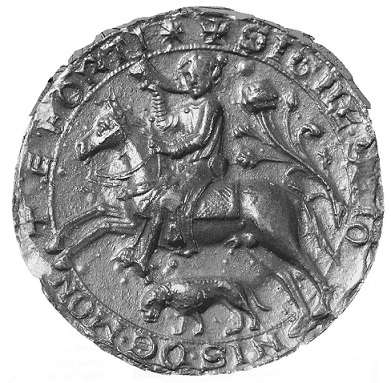 That the King had no immediate intention of abandoning his French lands is further suggested, on 29 August, when he issued commands for the assignment of land in Gascony, undertaking to settle any resulting pleas on a proposed future visit to Bordeaux that did not, in the event, take place.2  The archbishop of Bordeaux, who had played a major role in the defence of Gascony, was pledged repayment of 1000 livres which he given to Simon de Montfort, leader of the Albigensian Crusade, apparently in return for Simon's undertaking to make no attack upon the town of La Rèole, on the frontier between Plantagenet and crusading zones of influence on the Garonne.3  Again on 28 August, the King renewed his insistence that the men of Saintes be obedient to Hugh de Lusignan, and on the following day acknowledged receipt of 395 marks in ransom payments for enemy knights captured at 'Bourg' (Burg', unidentified) and since sent into captivity in England.4  On 27 August, he had settled his debts to a large number of horse dealers who had been supplying his army with horses, to judge from the very considerable cost of these animals, with destriers or war horses rather than with the average run of palfreys.5

On the same day, and still keen to keep the peace with the vicomte of Limoges, the King confirmed a grant of land in Cornwall bestowed more than thirty years before on the vicomte's mother at the time of her marriage.  As a daughter of Reginald earl of Cornwall, the vicomtesse Sarah was a granddaughter of King Henry I of England, thus establishing ties of kinship between the vicomte and John's royal dynasty.6 The more than 66,000 crossbow bolts, made on the estates of the vacant bishopric of Durham and thence carried via Portsmouth into Poitou, gives us some idea of the sheer size of the King's expeditionary force, and the vast costs still involved in maintaining it.7  The expenditure of so much money, in return for so little military achievement, was not the least of the King's worries as he awaited the arrival of peace envoys from Philip Augustus.