John sees to his family, prisoners, and hostages

Having set out southwards from La Rochelle on Saturday 12 July for Merpins and Cognac, on the border between the Saintonge and the Angoumois, the King turned north again, travelling via Saint-Jean-d'Angély to Niort, and then on Thursday 17 July to Breloux and Saint-Maixent-l'École, a traditional centre of ducal government.  All told in this week, he travelled roughly 100 kilometres south, before reversing his direction 100 kilometres north.  On 14 July, we hear the last of Plantagenet defence on the Loire, with orders to Pain de Rochefort, Guy and Pain de la Possonnière and their fellow members of the garrison at la Rochefort-sur-Loire to do with the castle as commanded by Renaud de Pons or Savaric de Mauléon, both of them major Poitevin barons in John's service, neither of them in any position to prevent the fall of Rochefort to the French.1  On 15 July, there was a renewal of protection and privileges for the men of Saint-Junien on the frontier between the Angoumois and Limousin, a town which claimed to have received privileges from kings Henry II and Richard I but which had more recently fallen under the lordship of the bishops of Limoges.2 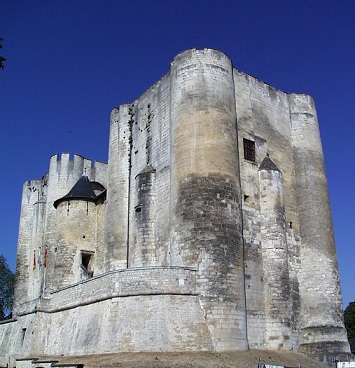 The Castle of Niort

On the following day, still at Niort, the King opened negotiations for a settlement of dower with his mother-in-law, Alice (de Courtenay) countess of Angoulême, herself a three-times married grand-daughter of Louis VI King of France, since 1203 pensioned off so that John himself might rule over his wife's county of Angoulême.  Alice was still living in July 1215, apparently at La Ferté-Gaucher in Champagne, an estate acquired from her first husband more than thirty years earlier.3  The intention in 1214 was presumably to prevent Alice's claims to Angoulême from impinging upon the exercise of Plantagenet authority there: our first indication that Angoulême itself was increasingly the target of royal concern.  By 18 July, the King had heard of the arrival of envoys from the King of Castile, to whom safe conducts were to be granted.4  As a result of the marriage between Louis of France and Blanche of Castile, Louis' father-in-law, Alfonso VIII of Castile, was in theory an ally of Philip Augustus, with a Castilian invasion of southern Gascony an ever-present threat to Plantagenet authority south of Bordeaux.  The negotiations of July 1214 were intended to forestall a repetition of events in 1205-6, when John's defeats in northern France had provoked a Castilian seizure of Gascony as far north as the Garonne.5

All of this suggests a concern for dynastic interests, and helps to explain John's anxiety that his family be gathered around him in Poitou, not just his wife and children but more distant relations, all potentially useful if there were marriage treaties to be negotiated with the Poitevin or French nobility.  One of the more remarkable dynastic pawns here was the King's niece, Eleanor of Brittany.  A prisoner since 1202 and the death or disappearance of her brother Arthur (events which themselves were paraded amongst the very blackest of John's crimes), in July 1214 Eleanor seems to have been with the King's army at or near La Rochelle.  Potentially, she was of use in the ongoing controversy over the duchy of Brittany, to which Eleanor had a claim by blood, but which had recently been conferred upon the King's cousin, Peter of Dreux, married to Eleanor's younger 'French' half-sister.6  On 15 July, John commanded that Eleanor be assigned robes, shirts of the finest material, and two pairs of boots.7  Even here, however, there were sinister elements, since the man instructed to furnish her clothes was Peter de Maulay, one of John's alien constables from the frontiers with Anjou, himself suspected of complicity, a decade earlier, in the murder of Prince Arthur.  To involve Peter de Maulay in the affairs of Eleanor of Brittany was very much to bring the wolf back to Little Red Ridinghood's wardrobe door.

Nor was it just his own family whose fortunes were hostaged to wider political interests.  On 16 July, the King issued instructions for the safe keeping in Poitou of hostages supplied by William de Braose, by the men of Dunwich in Suffolk, and more recently by the mayor and men of Saint-Jean-d'Angély.8  The Braose family was still reeling from the disappearance of earlier such hostages, the wife and son of William IV de Braose of Bramber (d.1211), said to have been starved to death by the King during the period of papal interdict, a few years earlier.  The hostages still in safe keeping in 1214 were presumably the four sons of William V, the heir of William IV who had disappeared into captivity, believed starved.  As such they were grandsons of Richard de Clare, earl of Hertford, subsequently a leading figure within the baronial twenty-five of Magna Carta.  There were links here to John's earlier crimes, since it was quite possibly because he knew too much of the circumstances of the death of Arthur of Brittany that William IV de Braose had first fallen into disgrace with the King.  Meanwhile, the taking of hostages from towns in both England and Poitou was yet further proof of the King's ruthless anxiety.  Dunwich was key to England's eastern defences at a time of Anglo-French invasion scares.  Saint-Jean-d'Angély was vital to communications between Poitou and Gascony.  Even in south-western France, fidelity and trust were becoming increasingly rare commodities.