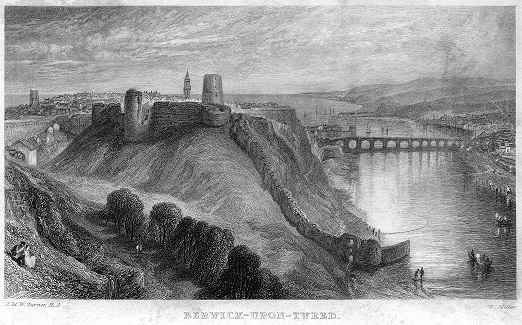 From Newcastle, the King went north to Berwick, travelling via the bishop of Northumberland's manors of Bedlington and Norham, and en route apparently taking the castles of Mitford (from Roger Bertram) and Alnwick (from Eustace de Vescy).1 The Melrose chronicle, whose detailed dating is not necessarily to be relied on here, records the burning of Mitford and Morpeth on 7 January, Alnwick on 9 January, Wark (a castle once held by Robert de Ros, inland on the Tweed) on 11 January, and the Scots royal burgh of Roxburgh on Sunday 16 January, apparently as John's army fanned out in advance of the King himself. At Melrose, meanwhile, on Monday 11 January, the northern barons renewed their oaths of homage to Alexander of Scotland. John's seizure of Berwick, which the Melrose chronicler dates to Friday 15 January, was accompanied by exemplary violence, including the deliberate torture of men and women. The chronicler, indeed, reports wild rumours that the King brought Jews in his wake, intending that they supervize the carnage.2 This perhaps reflects the presence at court of clerks associated with the Exchequer of the Jews, including Master Alexander of Dorset, at Berwick granted letters of protection, and Master Henry of Cerne, promoted to a third part of the church of Leeds, in the patronage of the vacant see of York.3 The Close and Patent rolls record only a small number of letters this week, most of them concerning the ongoing redistribution of rebel estates, or the custody of prisoners and hostages.4 Geoffrey de Marisco, justiciar in Ireland, was promised access to Carrickfergus castle, perhaps reflecting misgivings over the loyalty of the baronial colonists in Ireland.5 In Nottinghamshire, Richard of Laxton offered 100 marks and two palfreys to have the King's grace and benevolence, with half of this fine payable 'on the King's return from the north', and the rest at Easter.6 Fulk de Rumford offered 30 marks for the same, with the abbot of St Mary's York as his pledge.7 Another rebel who had negotiated his peace, Gerard de Furnivall, was promised the restoration of any 'tenseria' seized from his estate since his return to fealty.8