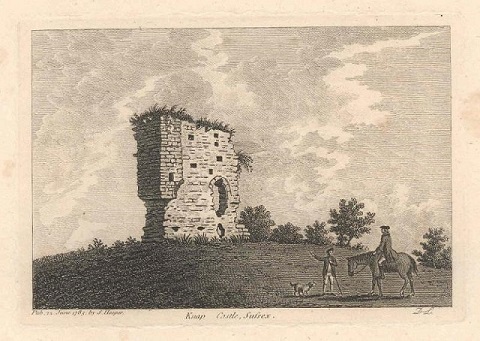 From Guildford, the King made his way south into Sussex, travelling in the general direction of Southampton Water. He passed four days this week at Knepp Castle in Sussex, a potent symbol of royal authority not least because it was one of the castles that John had confiscated from his erstwhile confident, William de Braose. At Guildford, on Sunday 18 January, John issued a charter granting John Marshal the manor of Hengham in Norfolk with the local hundred.1 At Knepp, four days later, he granted land at Havering and in London to William earl of Arundel, the most powerful secular landholder in Sussex.2 There were orders for Colchester and its castle to be placed under the authority of Stephen de Harengod, and for Stephen to be bought crossbows to defend the castle.3 The elections already anticipated at Faversham and Battle Abbey received the King's assent, the Battle election having apparently taken place in the King's own presence.4 For the first time in several weeks, there is evidence in the English chancery rolls of ongoing concern for the affairs of Gascony and Poitou. Orders were sent to the King's officials still governing there, Hubert de Burgh and Geoffrey de Neville, to ensure payment for a French knight, Theobald Crespin, whose claims to 100 marks in arrears of an annual fee were to be entertained so long as Theobald could show his intention of joining the King in England.5 As this implies, John was by this stage drafting in mercenaries from overseas, to forestall the threat of baronial conspiracy. It was to this end that he issued orders on behalf of Robert de Béthune, one of the more powerful men of southern Flanders.6 The chancellor was instructed to search the rolls of the Exchequer and the wardrobe, and the 'roll of the bishop of Worcester' (perhaps some sort of record belonging to Walter de Gray, bishop of Worcester, from his time as royal chancellor), to ensure that all fees owing to Flemings in England were brought up to date.7 There were also attempts to supply funds to Marie of Brabant, wife of the emperor Otto IV, whose dependence upon English largesse perhaps reveals the extent to which Otto's own affairs had become perilous since Bouvines.8 At Knepp Castle on 23 January, we have our earliest reference to the activities of another Sussex landholder, Enjuger de Bohon, descended from a distinguished Norman curial family, who is to be found seeking 100 planks from those that had arrived in Portsmouth from Ireland.9 Since 1213, Enjuger had enjoyed official position as one of two Norman 'marshals', set alongside two Englishmen, with a supervisory role over the King's military affairs.10 In due course, as we shall see, Enjuger was to involved in equipping what was intended as the ship with which King John pledged to embark on crusade to the Holy Land, the orders of 23 January perhaps reflecting the beginning of this commission and hence of the King's own plans to take the cross.11 According to the Pope, as early as September 1214, King John had cited the urgent need of assistance to the Holy Land as a reason for his truce with Philip Augustus. The Pope urged John to offer yet further support for the crusade.12

After a brief lull, there was the usual rash of instructions for local officials, including those in the bishopric of Durham, to offer hospitality to the King's huntsmen and hounds.13 Perhaps in another gesture intended to pacify a potential malcontent, the King stepped in to settle £100 upon a litigant in the Bench who had challenged Robert de Vaux for possession of land at Denham in Suffolk, thereby ensuring Robert's continued possession.14 By this time, Robert de Dreux was assumed to be well on the road to Winchester, with Peter des Roches instructed to find expenses for him and his gaolers in Winchester castle.15 Even more significantly, the King had by now sent an invitation to Savaric de Mauléon, one of the most powerful barons of Poitou, to cross to England and assist the royal defence.  Orders to receive Savaric and his men were sent to the sheriffs of the south western counties. Meanwhile, further work was undertaken on the defences of Corfe castle, with fourteen miners dispatched to dig a new moat.16