On Tuesday 17 June, John entered the city of Angers, his family's ancestral home, probably via Les Ponts-de-Cé, where there was a bridge whose profits Henry II had shared with the nuns of Fontevraud.  Having no proper fortifications, Angers fell without difficulty.1  John remained there only forty-eight hours before departing for Roche-aux-Moins where he was to camp, with only brief interruptions, for the next two weeks.  His reception in Angers stands in contrast to events at the beginning of June, when he had approached the city of Nantes, the last great city on the Loire before the river reaches the sea.  From 2-4 June, and again on 11 June, he had camped at the château de L'Épine, a castle in the modern commune of La Chapelle-Bas-Mer, a few kilometres south-east of Nantes.  On 5-6 June he had come as close to Nantes as the bridge at Pirmil, within clear sight of the island that divided the south bank from the cathedral and city itself.2 There he had been attacked by the Capetian defenders led by Robert of Dreux, brother of Peter newly created duke of Brittany.  Robert was taken captive together with others of his knights.3  But finding Nantes still closed against him, John made his way up river, crossing (perhaps by ferry) to Ancenis on the north bank of the Loire on 11-12 June4, then recrossing to Saint-Florent-le-Vieil, before passing along the south bank through Rochefort-sur-Loire to Blaison by Saturday/Sunday 14-15 June. 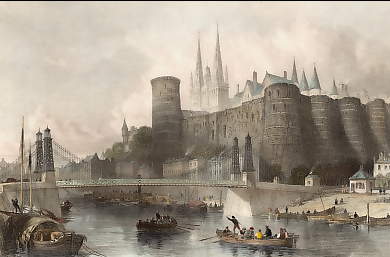 We know nothing of the celebrations that greeted his entry into Angers.  What we do know is that the King began to reallocate property within the city previously assigned to Capetian pensioners.  In this way, through to the end of June we find instructions to Hubert de Burgh, seneschal of Poitou, now a leading commander of the army on the Loire, to assign houses in Angers to Savaric de Mauléon, one of the most important of John's Poitevin allies, and to William earl Ferrers.5 The house given to earl William had previously belonged to a man named Robert fitz Walter.  No certain identity can be assumed here with the English rebel baron of that name who in 1212 had been forced to flee from England following his involvement in a plot against King John, apparently involving treachery and an attempt to ensure the King's murder on campaign against the Welsh.  It is nonetheless possible that the English Robert had found refuge in Angers, as a French royal pensioner.

As John progressed along the Loire, he had come into possession of considerable plunder taken from his enemies.  At Blaison, on 14 June, he sent out commands governing his own fifth-share of plunder taken by his men at 'Dondun', both in the ransom of knights and in other profits.6  'Dondun' is perhaps the modern Oudun, just to the west of Ancenis on the Loire's north bank.7   On Friday 20 June, the King was still making arrangements for his fifth share of plunder, including more than 400 head of cattle, 400 pigs and 15 foals, to be sold by merchants attached to the expedition: a significant indication of the extent of the profits of war about which more conventional Exchequer sources remain for the most part silent.8  There were also concerns over relations with the Church: pensions to be paid to cardinals, and from Angers on 17 June a charter undertaking to make good the King's promises to archbishop Langton and the bishops of Lincoln and Ely over the 40,000 marks that the King was estimated still to owe in damages from the late Interdict.  This promise was witnessed by the papal nuncio, Master Pandulf, himself in attendance upon the King at Angers, as were the bishops of Norwich and Angers, and at least two of Langton's clerks, acting as intermediaries.9

Having spent less than two days in Angers itself, on Wednesday 18 June the King moved a few kilometres south, to the castle of La Roche-aux-Moins, in the modern commune of Savennières, facing across the Loire to Rochefort on the river's south bank.  The castle of La Roche-aux-Moins (belonging originally to the Benedictine monks of Saint-Nicolas at Angers), is today a ruin forming part of an estate today better known for the production of white wine.  In the 1920s, it belonged briefly to Karl Benz, the German car-manufacturer.  In 1214, there was a castle here, fortified by Philip Augustus, as protection for Capetian control of the north bank of the Loire, deliberately facing across the river to Pain de Rochefort's castle at Rochefort-sur-Loire.10  The chancery rolls report John's presence at La Roche-aux-Moins and also at a site named Mota (forgetting the modern Benz connections, presumably French 'Motte', English 'Mound'), perhaps a siege castle, perhaps the location named La Motte just across the Loire from Savennières, in the modern commune of Chalonnes-sur-Loire.

Camped before La Roche, on 19 June, the King wrote to his adminstrators further south, with proposals that they now send the Queen, Isabella of Angoulême, the King's treasure, and two of his children (Richard and Joan), north to the Loire.11 On 21 June, from La Motte, he issued instructions for the collection of ransoms from Breton and French knights held in his prison at Niort, and restored the Essex manor of Hatfield to Guy de la Possonnière, nephew of Pain de Rochefort, in a charter witnessed by Ralph de Lusignan count of Eu, the earls of Chester and Derby, Hubert de Burgh and a small group of southern French barons including Renaud de Pons and Hugh de Lusignan.12  Clearly, John remained confident that his expedition was prospering and that the centre of his operations could now be transferred northwards to the Loire.