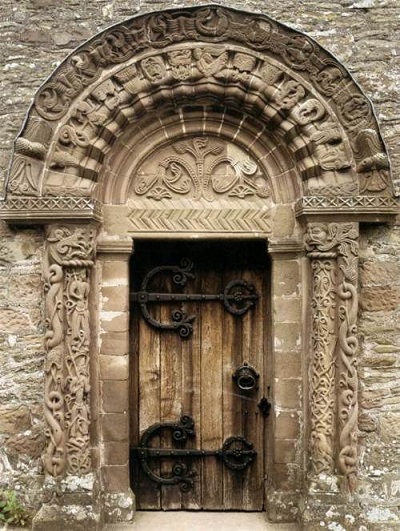 In the present week, after what seem to have been several days with the Queen in Gloucester, the King travelled west to Monmouth, and then north to Kilpeck en route for Hereford.  In the process, he retraced his steps of almost exactly a year earlier, when in late November 1213 he had visited Kilpeck, travelling in the opposite direction from Hereford, via Kilpeck to Monmouth.  Kilpeck was itself held in chief of the King, and in 1213-14 was perhaps in royal custody during the minority of its heir.1  Very little business is recorded for this week, and still no royal charters.  There was what appears to have been a routine notification of the King's assent to the election of the prior of Selby as abbot.2  Henry de Vere, the King's clerk earlier involved in negotiations with the monks of Bury, was presented to the royal living of Burton (perhaps Burton by Lincoln, Lincolnshire).3  The death of Beatrice de Warenne, heiress to the Norfolk barony of Wormegay, obliged the King to issue special instructions to enable Hubert de Burgh, the late Beatrice's husband, to retain her dower manor of Felmingham during the King's pleasure.4  Similar arrangements were made to ensure Master Humphrey, the King's cook, land at Flintham in Nottinghamshire held by virtue of his late wife, Agatha, daughter of Hugh Bretel, with later evidence here to suggest that a rival claim to Flintham had already been invested, by means unknown, in the Anglo-Breton courtier, Philip d'Aubigné.5  On 18 December, the King ordered Gilbert fitz Reinfrey, a future rebel, at this time still sheriff of Lancashire, to grant the abbot and monks of Whalley firewood and ten good oaks for the building of their church.6  The most important business conducted this week seems to have taken place that same day at Monmouth, from where the King ordered the release of Welsh hostages, previously guarded by Engelard de Cigogné at Gloucester. Their release is said to have been negotiated by Joan, the King's illegitimate daughter, herself married to Llewelyn ap Iorweth, prince of North Wales.7  Joan had already played a leading role, following the defeat of Llewelyn in 1211, in pleading for mercy before her father.  The hostages released in December 1214 may have first been surrendered by the Welsh princes following the King's conquests in 1211, or perhaps either earlier or later, perhaps following the renewal of hostilities in 1212.  At all events what we observe here is the ongoing negotiation of peace with the Welsh, in due course to find a prominent place in Magna Carta, not least in Magna Carta clause 58, requiring the release of all Welsh hostages, including Llewelyn's bastard son Gruffydd.8  From Gloucester, on 14 December, the King commanded a piece of russet cloth for his Christmas festivities at Worcester, and the sending to Worcester of a bay horse previously kept at Bristol.  A black horse, given to the King by the Flemish mercenary Hugh de Boves, was to be presented to the constable of Gloucester as a gift.9  In the week before and after Christmas, little serious business could be expected at a court now chiefly preoccupied with feasting.