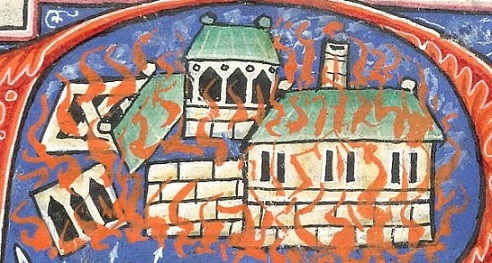 The burning of buildilngs, from BL Yates Thompson 12 f.161

The events of this week are only sporadically reported in the chancery rolls. Instead, we rely upon the Anonymous of Béthune and the Melrose chronicler for our knowledge of the King's movements, from Berwick (restored to the Scots since the 1190s) via the Scots royal burghs of Dunbar and Haddington to within twenty miles of Edinburgh. On his return, the King's mercenaries pillaged Durham Cathedral's dependent priory at Coldingham, and the King himself led a sack of Berwick, setting fire even to the house in which he had lodged.1 Before setting out for the far north, Hospitallers in Ireland had offered 100s. for letters of protection, duly issued on the King's return to Berwick on 22 January.2 There were also protections for another Hospitaller, sent as the King's envoy to Dover, and for a monk, brother William, reported on 17 January to be returning to his house of 'Meaures', perhaps Melrose.3 At Berwick, and no doubt further north, the King was accompanied by the earls of Chester and Ferrers and by the former rebel now returned royalist, Roger de Montbegon.4 The earl of Chester received licence to export two shiploads of merchandise, apparently into Ireland.5 There was presentation for another of the King's companions, Master Alexander of Dorset, to a prebend in York Minster.6 Most notably, at Berwick, on 22 January, another of the northern rebels, Gilbert fitz Reinfrey, lord of Kendal, was brought to heel. In return for the King's benevolence and grace, and the release of his son, William of Lancaster, and his knights, Ralph of Aincourt and Lambert de Bussy (all three of them captured at Rochester), Gilbert offered a massive fine of 12,000 marks (£8000), pledged with ten male and female hostages, including Gilbert's grandson and great-nephew. He also agreed to hand over his castles at Kendal (known as Kirkby in Kendal) and Merhull (later Mourholme, in Warton, Lancashire) to hold ('in tenanciam'). Should any of Gilbert's hostages die, 'by chance' ('casu fortuito'), then others were to be surrendered in their stead.7 For a King such as John, whose custody of hostages and prisoners was notorious, words such as these would have sounded doubly ominous. Perhaps at Berwick, perhaps shortly later, Simon fitz Walter, a cousin of the baronial leader Robert fitz Walter, fined 100 marks and 'his destrier' (perhaps the very horse that he had ridden into the King's presence) in order to make his peace and to have back his lands in Northamptonshire and Cumberland. Once again, a female hostage, Simon's daughter Matilda, was demanded as pledge for this fine.8