A Lost Engrossment of the 1215 Magna Carta?

Nicholas Vincent has drawn my attention to a copy of the 1215 Magna Carta in one of the volumes of Selden manuscripts now preserved in the Library of Lincoln’s Inn in London. A collation of the text against the four surviving originals of the 1215 Charter has yielded interesting results. There are grounds for thinking that the Selden Magna Carta was copied from a damaged engrossment of the Charter which had much in common with the two originals now preserved in the British Library.

John Selden (1584-1654) was one of the great jurists and legal historians of the seventeenth century. After his death a portion of his papers passed to his executor, Matthew Hale, who left them in his will to Lincoln’s Inn. There they were bound into five volumes entitled ‘Collectanea Seldeni’. The contents of the volume in which Magna Carta is found are miscellaneous.1 Original documents are interspersed with material copied by amanuenses and notes and memoranda in Selden’s own hand. The volume includes ‘A list of the names of sixty-four kinds of birds collected by Selden’, apparently ‘the only trace of Selden’s interest in natural history’.2 The copy of Magna Carta was made by an amanuensis in a large clear hand. It was written on both sides of twelve pages of paper and (for no apparent reason) on only one side of two more. When the pages were bound into the Lincoln’s Inn volume they were arranged in the wrong order or at least not re-arranged into the right, and the numbering of the pages, made after the binding, reflects this mistake.3 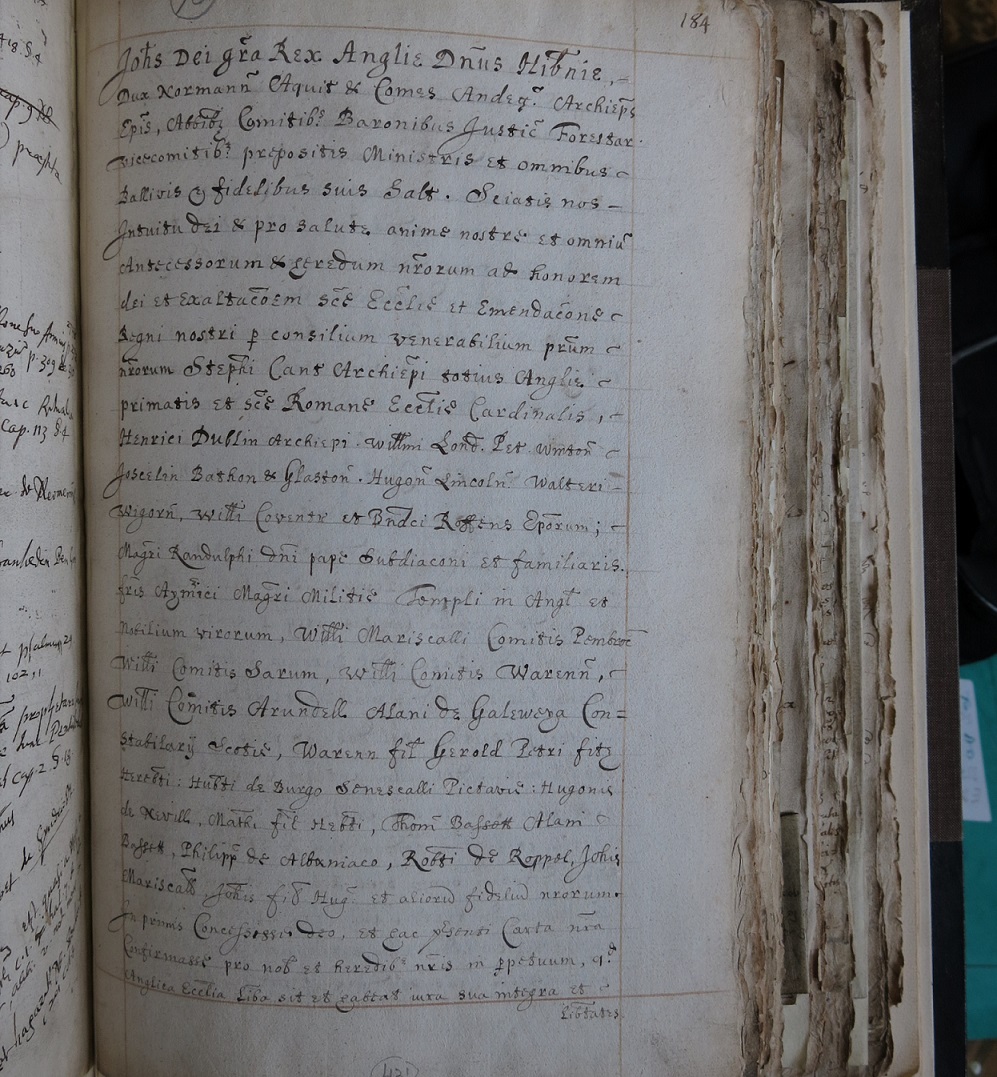 There are four surviving engrossments of the 1215 Magna Carta against which the Selden copy can be checked. Two of these are in the possession of cathedrals, those of Lincoln and Salisbury, where they have probably been throughout their lives. The other two are now in the possession of the British Library and are the star exhibits in its great 2015 Magna Carta exhibition. Having been part of the collection amassed by Sir Robert Cotton they are conventionally labelled Ci and Cii. Recent research has shown that Ci was, in the 1290s, in the archives of Canterbury Cathedral whither it probably went in 1215. The provenance of Cii has yet to be determined. One possibility is that it was a Charter sent to the bishop of London. The following points arise from an examination of the Selden copy and a collation of its text with those of the four surviving engrossments.

1. The copy was made with reasonable care. The silliest mistake comes at the start of the security clause (chapter 61) where ‘pro Deo’ is rendered ‘pro dono’. At the start of the Charter itself, amidst the list of John’s counselors, ‘Pandulf’ appears as ‘Randulf’. Chapter 26 reads ‘non’ rather than ‘nobis’, chapter 29 ‘viderimus’ not ‘miserimus’, and chapter 57 ‘autem’ rather than ‘ante’.

2. The amanuensis left gaps where words in his text were missing or indecipherable. So there are gaps for ‘dominis’ in chapter 31, ‘toltis’ and ‘invenientur’ in chapter 41, and ‘fac’ in ‘[fac]emus’ at the start of the security clause (chapter 61).4

3. The text copied is that of the authorized version of the Charter. There are none of the variations found in some other copies.5

4. The text differs from that found in both the Lincoln and Salisbury Charters since it follows none of their small variations in word order, tense and so on.6

5. In chapter 4 the text follows the British Library’s Canterbury Charter and Cii in reading ‘nobis respondeant’ as against ‘respondeant nobis’ found in the Lincoln and Salisbury charters.

6. In chapter 50, which expelled the kinsmen of Gerard d’Athée from office, the text follows Cii in reading ‘Peter, Gio and Andrew’ as against ‘Andrew, Peter, and Gio’ found in the other engrossments.

7. Most striking of all, the text omits altogether the three passages that were omitted from both the Canterbury Charter and Cii. In both the latter, the scribes had to add in the passages at the bottom of the Charters with an indication of where they should go in the text above. These passages were ‘per eosdem ita quod nos hoc prius sciamus vel justiciarius noster si in Anglia non fuerimus’ in chapter 48, and ‘et eodem modo de justicia exhibenda’ and ‘vel remansuris forestis’ in chapter 53. In chapters 56 and 61 the Canterbury scribe also omitted two other short passages and included these too at the bottom of the Charter. These mistakes were not repeated in either Cii or the Selden text.

8. The text is unfinished. On p.188 verso, early on in the security clause, it breaks off in the middle of a sentence, the last word being ‘observare’.  There would have been room on the line for the next word ‘tenere’. Eight lines are then left blank before the end of the page. Because of the muddling of the pages, the next page, p.189, starts in the middle of chapter 47.

I now offer a few tentative suggestions as to what the above observations might indicate about the text. 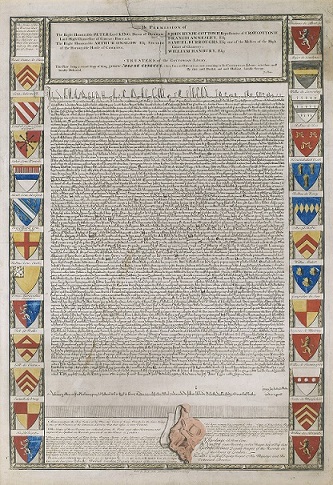 The text from which Selden’s amanuensis worked was damaged, hence the way he could not read individual words. Perhaps this also explains some of his mistakes. Damage involving the loss of the last part of the text would likewise explain why the amanuensis broke off so abruptly in the middle of a sentence in the security clause.7 If the text was indeed damaged in these ways, this might suggest it was on a single sheet of parchment, for a single sheet would be more liable to suffer deterioration than a text in a book. Since in the Canterbury Charter and Cii the missing words are clear, and since both Charters are complete, Selden’s amanuensis can have worked from neither, despite the fact that both were in the collection of Cotton, Selden’s friend.  Since Selden's single sheet, if we may call it that, omits the same passages as Canterbury and Cii, the three are closely linked. That is confirmed by the parallel word order mentioned under no. 5 above. It may be that the missing passages in the single sheet were written in at its foot, as they were in Canterbury and Cii. This would explain why they were lost to Selden’s amanuensis along with the whole of the last part of the Charter. Selden's version is, however, more closely linked to Cii than to Canterbury for in its ordering of the names in chapter 50 it follows Cii, as against Canterbury and the other engrossments. Likewise, in parallel with Cii, it does not repeat Canterbury’s omissions in chapters 56 and 61. It is unlikely, however, that Selden's single sheet was itself a copy made from Cii or a parallel text. If it had been, the scribe would surely have noticed the additions at the bottom and have incorporated them into his text, just as did the scribe who copied the Canterbury Charter into the Canterbury Register.8

There are, therefore, at least some grounds for thinking that the single sheet copied by Selden’s amanuensis was a damaged engrossment of the 1215 Magna Carta. In that case, at least three of the engrossments, Canterbury, Cii and the Selden sheet, were closely linked, notably by the omission of the three passages mentioned above. How this came about one can only speculate, but perhaps the most likely explanation is that all three derived from the same or a similar draft in which the three passages were omitted or included in such a way as initially to be obscure. It was only in a later check that the omissions were noticed and the missing passages added in at the foot of the three Charters.9

When Selden wrote about Magna Carta in his England’s Epinomis, published in 1610, he contrasted the Matthew Paris text of the 1215 Charter with the printed text of the Charter of 1225.10 He did not realise that Paris’s text was actually a hybrid of the Charters of 1215, 1217 and 1225.11 The copy of Magna Carta discussed here shows that Selden did ultimately obtain the authorized version of Magna Carta 1215, bar the security clause and the conclusion.  I wonder if he realized it was different from the version in Matthew Paris. Perhaps Selden scholars will be able to comment on that question. In the meantime, it is surely significant to find one of the greatest lawyers of Stuart England taking a very precise interest in the charter of 1215. We are often told that Blackstone was the first modern commentator properly to distinguish the 1215 from the 1225 text of Magna Carta. The materials for such a distinction, it now appears, were at the disposal of John Selden, more than a century before Blackstone's commentary was written.