The fines and commands assembled below into a single letter addressed by King John to the archbishop of Dublin supply important evidence of the King's dealings with Ireland in the winter of 1215. Whatever evidence of these transactions survived in Ireland itself, up to and including the lost Irish Pipe Roll 17 John, went up in flames when the Dublin Four Courts were bombarded at the start of the Irish Civil War, on 29-30 June 1922. From that great bonfire of Irish public records very little remains, save for antiquarian transcripts fortuitously preserved elsewhere. These include a unique copy, once belonging to Sir James Ware (1594-1666), of the Irish Pipe Roll for the year 14 John (1211-12).1 The Irish Exchequer that produced the Pipe Roll, and that is referred to below as hearing accounts (no.1) was itself perhaps a fairly recent innovation, first definitely referenced in 1200.2 Its creation reminds us of the significant role that Ireland had played in the early years of King John. As the present record reveals, although generally ignored or only cursorily regarded by the King's modern biographers, Ireland remained of keen interest to John thereafter.3 Many of the men or families whose names appear below enjoyed thirty or more years of connection to John, from the time of his first Irish expedition of 1185. 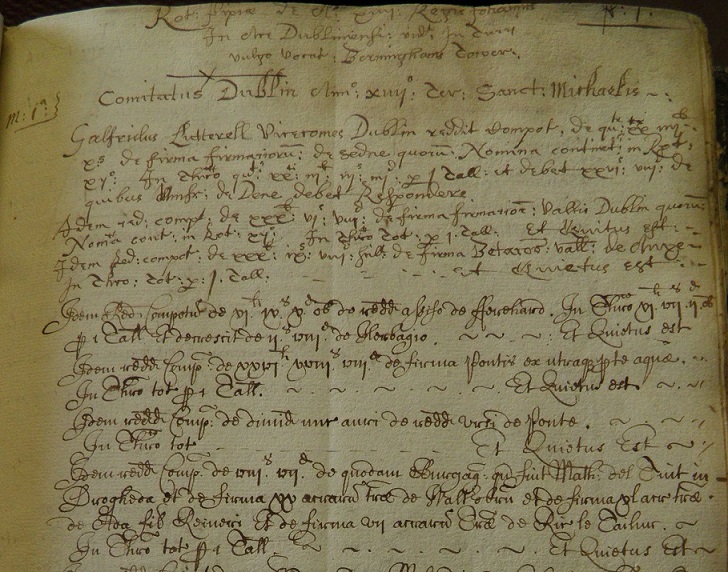 Amongst the wider themes that our record helps us to address, two in particular stand out. The first is that Ireland continued to represent a major source of revenue and patronage to the King, albeit of patronage shared out amongst what was already a close-knit colonial community. All told, our record lists fines of 3960 marks and £100 (£2640 all told), and commands distraint of a further 1300 marks and £100 of debts (£966) for which accounts were still owing: a total value in excess of £3600. At a time of acute need for the King, these Irish revenues played no small part in the King's financial calculations. Secondly, most of the men whose fines are referred to below were descendants of those who had themselves been introduced to Ireland not by the King, but in the following of one or other of the great entrepreneurs (Strongbow, William Marshal, the Lacys and the Braoses) who since the 1170s had achieved the conquest of most of Ireland save for Connaught. Our record itself refers to this conquest as the time 'when the English came into Ireland' (below no.8): an important reminder of the fact that, for all the nineteenth-century emphasis upon a 'Norman' or 'Anglo-Norman' conquest of Ireland, contemporaries were inclined to view this as very much conquest by the 'English'.4 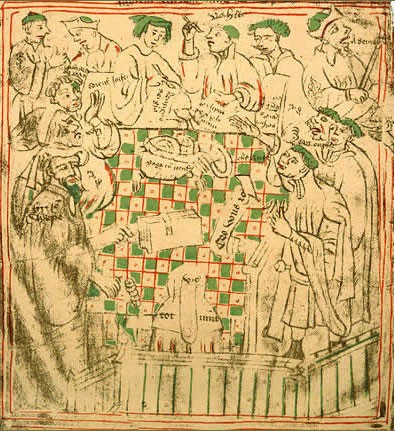 At the time that our record was compiled, in February 1215, one event above all others continued to colour John's relations with the colony. The King's Irish expedition of 1210 had been directed both against William de Braose and against Hugh and Walter de Lacy, many of whose followers had been sent into captivity in England following the King's seizure of the Lacy fortress of Carrickfergus in July 1210.5 By February 1215, there were already signs of a reconciliation between King John and Walter de Lacy, cemented in July 1215, at the time of Magna Carta, by the restoration to Walter of a large part of his Irish estate in return for a fine of 4000 marks itself first negotiated in March.6 In the meantime, the King's dealings with hostages and prisoners (below nos. 5, 12, 13, 15, 17, 27), and his specific engagement with former members of the Lacy affinity (below nos. 2, 3, 5-7, 11, 12, 14, 22) suggest an attempt, as early as February, to ensure the peace of Ireland, not least in order that Ireland could be used as a base from which to organize help for the King against his increasingly restive English barons.

For his assistance with various of the place-names and personalities below, we are indebted to Peter Crooks. The prosopography of the English conquest of Ireland, meanwhile, remains a subject richly deserving both clarification and proper maps.

Letters of the King to H(enry) archbishop of Dublin concerning fines and debts owed in Ireland. Corfe, 1 February 1215

The King sends greetings to H(enry) archbishop of Dublin.7

(1) We command you to distrain William de Tuit to render his account before you at our Exchequer in Dublin, or that he come before us, to answer to R. and H. de Tuit and for the coin and rings and gold found in the castle of Killalon (Killamlun) (co. Meath).8

(2) Moreover, distrain R. de Bosco to render his account for Granard (Grenardus) (co. Longford), or that he come before us to answer for this.9

(3) From W(illiam) Hope, who married without our licence and who offers us 100 marks, take a greater fine if you can, or at the very least he either gives 100 marks or comes before us to answer on this.10

(4) From Murtagh (O'Brien) (Muriadac), who offers us 1000 marks and a further 100 marks a year for the four cantreds of land that belonged to the bishop of Norwich, take the fine if that should seem expedient, or increase it if you can, and take into our hands the other land that belonged to the bishop, and the castle of 'Esclon' (Sklon') (alias Kilkeedy, co. Limerick).11

(5) From the wife of William le Petit,12 who offers us 100 marks to marry and for the release of her son who is a hostage for R(ichard) de Feipo and so that we should take R(ichard) (de Feipo)'s son as hostage, take the fine, or more if you can, and when it is paid, have sent to us in England the son of R(ichard) (de Feipo), and we shall then allow the wife's son to go free.13

(6) From William Sancmelle who offers us 200 marks for the land of his father, take the fine, or more if you can.14

(7) From Walter Sancmelle who offers us 100 marks for his lands which his lords seized on account of his captivity, take the fine, or more if you can, and allow him to have these lands.15

(8) From the monks of Dublin who offer 60 marks to have their bounds as they had them when the English came into Ireland, take the fine, or take more if it seems to you expedient, and ensure these bounds.16

(9) From the burgesses of Dublin who offer us 300 marks to have their vill at fee farm, by our charter, with that part of the water which belongs to us, take the fine or a larger one as may be expedient, and then they will send for our charter which we shall have made for them, if you advise it, reserving however the gifts of fisheries which we have made, and keeping in our hands the sites of mills.17

(10) Diligently hear the account of the keepers of the exchange and our mint, and let us know how they answer and how much profit we shall have thereby.

(12) From Adam de Capella, a hostage, who offers us 40 marks for his release and so that another hostage may be put in his place, take securities for this or a larger fine, if you can, and he will put another hostage in his place as you may deem expedient, and be released.20

(13) From Roger de Tuit, hostage for his brother Richard who died, who offers us 40 marks for his release, take security for his faithful service, and if you advise us accordingly, we shall have him released.21

(14) From Amfred de Dene22 who offers us 100 marks for custody and marriage of the daughter and heir of Adam de Rudipat23 with whom the son of William T(r)oyn contracted a marriage before he was five years old, as is said, take the fine if a divorce can lawfully be arranged between them.24

(15) From J. and W. fitz Stephen, hostages, who offer us 20 marks for their release and to have their land, take this or a larger fine if you can.

(16) From John the chamberlain who married the sister and heir of Walter Duneyn and who offers us 100 marks for Walter's land, take this or a larger fine if you can.25

(17) From Roger the son and heir of William de Ham(m)a(r)z, who offers us 100 marks for his release and to have the land of William his father, take this or a larger fine if you can.26

(18) From Hamo the son and heir of Hamo de Valognes, who offers us £100 for the castl(e) and land of his father, take the fine and allow him the castle and the land.27

(19) From those who hold the lands for which Philip de Angulo offers 300 marks, take a fine of 300 marks for these lands, or more if you can, and an alternative will be assigned to Philip, as you see fit, in return for an appropriate fine.28

(20) Distrain the following, our debtors, to pay us their debts owing from fines made in the time of the bishop of Norwich, unless they have already paid, namely:

(23) From William d'Aincourt for Clonmel (Crumell') (co. Tipperary) £100, and 100 marks for marrying his daughter to the son of Elias fitz Norman31

(25) You should distrain the burgesses of Dublin, who received 500 marks from the bishop of Norwich to fortify their vill, to render their account.33

(26) Of the 1000 marks offered to us for the custody and marriage of the son and heir of Thomas fitz Maurice, for which Thomas' wife fined 500 marks with us when we were in Poitou, ensure our best interest in so far as with reason you can.34

(27) From Geoffrey de Cusack, who offers us 100 marks for his release, take security for the fine and for his faithful service to us, and let us know from whom you have that security, and then we shall release him.35

Witnessed myself at Corfe, 1 February

John moves toward the March (The Itinerary of King John)